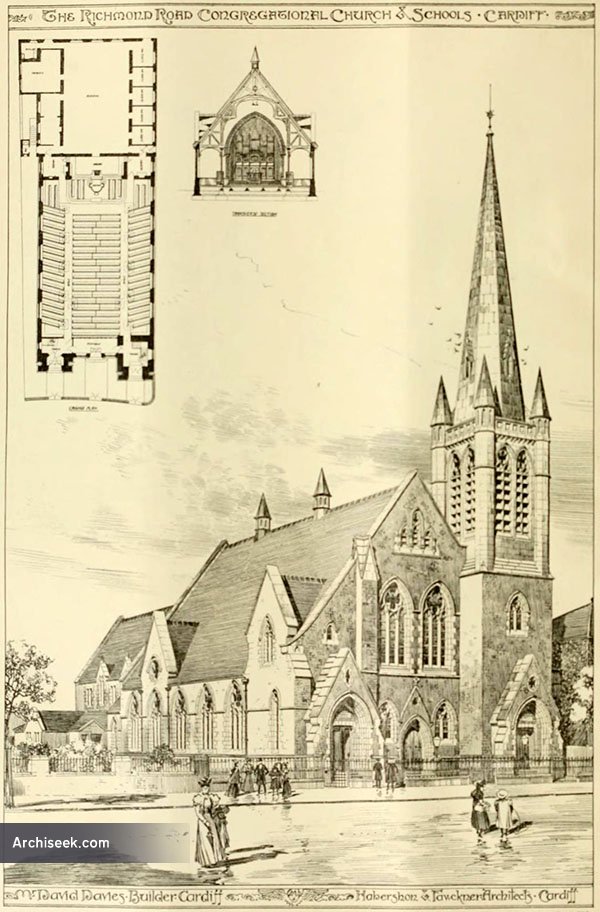 “These buildings, which are just completed, occupy a prominent site in the midst of a thickly-populated neighbourhood. The schools, which are at the rear, were erected eleven years ago, and until now have served for church purposes also. The school hall affording accommodation for 300, with eight classrooms. The church, including the chancel, is 90ft. in length, and 53ft. in width, and has been designed in the First Period of the Decorated Period of English Gothic, the front facade being flanked with a massive square tower, surmounted by a spire reaching to a height of 117ft. Owing to the tower abutting the side road, buttresses had to be avoided, the loss of effect being compensated to some extent by the addition of porches to the main entrances. A total accommodation of 750 sittings is provided. Internally, the church is divided into nave and aisles by timber arcading, supported on narrow columns, from which spring the trusses supporting the roof. The ceiling is octagonal in form, and lined with felt and match-boarding Pitch-pine is used throughout for joinery. Ward and Co.’s wood-block paving is laid in the entrance vestibules and corridors. The effect of the interior is enhanced by the stained glass in the windows, which, owing to the generosity of a lady member, is more elaborate than provided in the contract, and has been designed and executed by Mr. T.H. Yates, of Birmingham. The church is to be warmed with hot water, the lighting being effected with electricity. These sections*have been executed by Messrs. W.A. Baker, of Newport. The contractor for the building is Mr. David Davies, of Cardiff (who also built the schools), the amount of his contract (including warming and lighting) being £4,495. The architects are Messrs. Habershon and Fawckner, of Cardiff and Newport.” Published in The Building News, November 11, 1898.