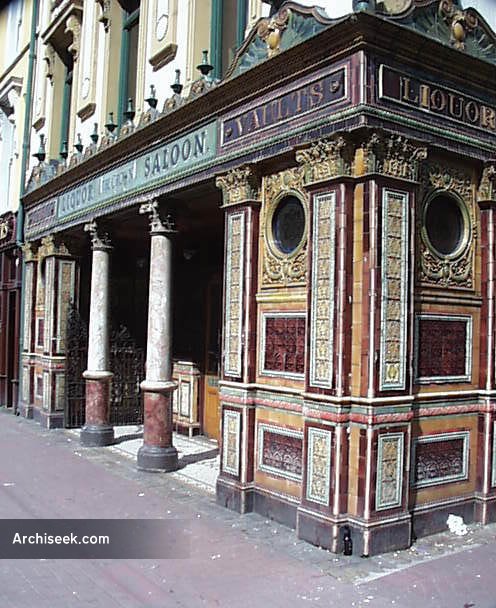 The Crown Liquor Saloon in Great Victoria Street, Belfast is one of Victorian gin palaces which once flourished in the industrial cities of Britain. Today wonderfully preserved and owned by the National Trust, the Crown is still well used by the people of Belfast.

The Crown dates back to 1826, when the first train ran from Belfast to Lisburn. It was then known as the Railway Tavern and was owned by Felix O’Hanlon; he sold it to Michael Flanagan, but it was Michael’s son, Patrick, who was destined to make it famous. A student of architecture, he travelled widely, and was impressed by what he saw. He arrived home with ideas to brighten up the old family bar.

The interior of the bar was built by a local firm in 1885 who in 1898 clad the exterior in faience and tiles. The exterior façade of the bar is a riot of polychromatic tiles and colour.

The interior of the bar is no less decorative than the exterior, boasting beautiful carved snugs, and an ornate bar, floor and ceiling. The year 1885 was an era of emancipation in Ireland, which saw a sharp increase in the building of Catholic churches. Skilled craftsmen from Italy were brought into Ireland to work on these churches and it is believed that some may have moonlighted on the interior of the Crown.

The interior of the crown is a riot of colour, textures and materials. Mosaic tiles, brocaded walls, highly-patterned and coloured tiles, vigorous wood carving throughout, ornate mirrors, and wooden columns with Corinthian capitals means that almost every surface is decorated. The long balmoral red granite-topped bar is divided by columns and faced with decorative tiles and a heated foot rest.

In the elaborately carved wooden snugs there are gunmetal plates for striking matches, and an antique bell system which alerts bar staff. Drinking snugs, according to old records, were not originally built for comfort, but to accommodate those people who preferred to drink quietly and unseen.