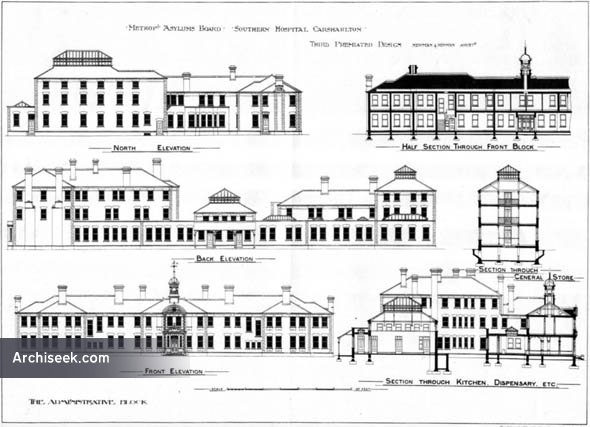 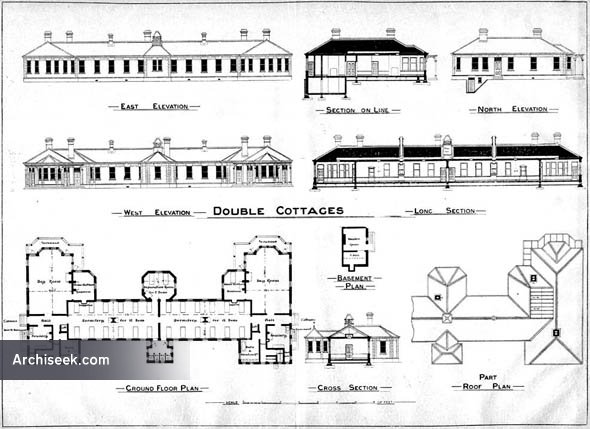 “To-day we illustrate the third premiated plan for this great hospital. Messrs. Newman and Newman are the authors of this design. On November 15 last the second premiated plans appeared in our pages. With reference to the accompanying drawings, lent us by the Metropolitan Asylums Board, it will be seen that Messrs. Newman and Newman have placed their administrative buildings in a central position, and they are of easy entrance without penetrating into the hospital area. The isolation buildings are to the extreme east of the site, well separated, as they should be, and the laundry buildings are as far away with reference to the direction of the prevailing winds as could be contrived. The general scheme is governed by an endeavour to secure the best aspects and the greatest amount of sunshine for the cottage wards and staff quarters. All these buildings are isolated.

The medical superintendent’s house is located so as to be accessible to all parts, and insure a comprehensive survey of all that is going on. No building occupied by infected persons is placed less than 100ft. from the boundary of the estate. In the administration block the officials are placed in the front. In the centre, behind the entrance -hall, is the dispensary, accessible both from the male and female sides of the buildings, and the same necessary provision of access is observed in the planning of the kitchen to the rear.

The serveries at the back open into a covered yard, in which motor-vans for the distribution of the food to all parts of the hospital would be worked. The messrooms for the staff are well placed, and the servants are admirably provided for in this plan. The difficulty in lighting long corridors in the centre of a large building not infrequently is met by borrowed lights. Upon the first floor are the bedroom cubicles and bathrooms for the staff and officers. The cottages are one floor only, and each double cottage contains the necessary accommodation for 24 beds. A separation room is connected with each block, and is available from either of the two cottages. In each single cottage is provided the house-mother’s bedroom, from which she can readily overlook and supervise the contiguous dayroom and dormitory, scullery, safe, linen cupboard, as well as the bath and ablution room.

The three w.c.’s and slop-sink, which are common to both cottages are also provided. Verandahs are shown outside the dayrooms, from which the airing courts, sheltered from the north and east are accessible. Adjacent to each group of five double cottages is a staff building for sub-matron and staff. The architectural treatment is as plain as possible on account of exposure. Stock bricks are intended to be used with red brick bands and dressings, and plinths of blue Staffordshire bricks. Bangor slating was proposed for the roofs.” Published in The Building News, December 2 1898.