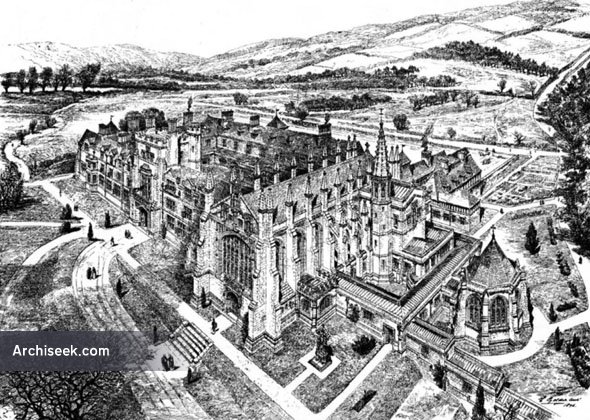 From The Building News, January 7 1898: “This building, situated in a beautiful estate near Rugby, Staffordshire, is now in progress. The finished portions include the chapel, the west wing, and the kitchen block, while work has been begun on the south wing. The design was originally intended to be carried out in Penkridge stone ; this, however, has been substituted by red brick for the walling with dressings of the above-mentioned stone, the roofs being covered with green slates. The treatment throughout ‘has been kept plain and simple, except in the church, where the chantry chapels, the forty-four canopied stalls in the choir, and the high altar are all of elaborate workmanship. The organ, which came originally from Eton, is a good specimen of 15th-century work ; it is being rearranged, and will occupy a position on corbels against the choir wall. The architect is Sir. Edward Goldie, of 10, Kensington-Wharf, W., and the contractors Messrs. Hadnell and Son, of Rugby. Our illustration is taken from the drawing exhibited by the architect at the Royal Academy last summer.”