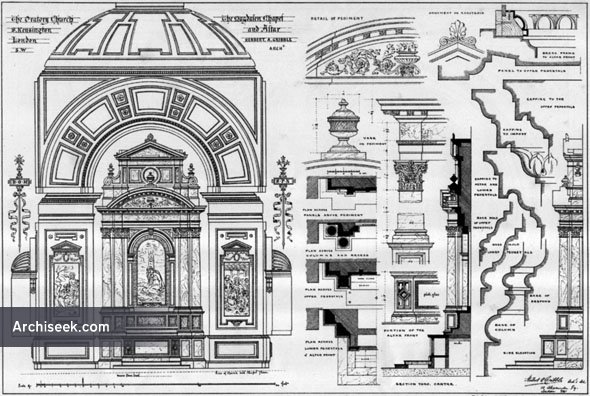 Chosen after an architectural competition, The Building News and the British Architect were generally critical of Herbert Gribbles chosen design, who was only 29 when he won the competition. The foundation stone was laid in June 1880; and the new church was consecrated on 16 April 1884. The dome was completed in 1895, standing 200 feet (61 m) tall and is the second largest Roman Catholic church in London, after Westminster Cathedral (1903).

“In the application of the marble throughout the edifice, care has been taken to bring this material into play as a constructive element, binding the same into brickwork ; but not until after the brick- work was raised about 50ft. from the floor, and avoiding the system universally adopted in Italy of veneering. The whole of the marble has been quarried in the vicinity of Plymouth, the colours being arranged as follows:— Commencing from the floor, the plinth is in Pomfleet black, the capping and base of dado in mottled Mill Quay, and the die in flashed Mill Quay, the base of the pilasters in green, and the shafts in Radford red. The coupled columns of the chapel arches are in varigated Bedford on bases of a warm and delicate shade of lavender. None of the samples can boast of intensity of colour, but the larger portion of the red and also the green possess great beauty. The caps and other ornamental portions of the interior will be in carton-pierre and fibrous plaster, picked out in gold and colour, the organ-gallery, with its compound brackets in polished walnut, and all historical subjects in mosaic.” The Building News, September 30 1881.