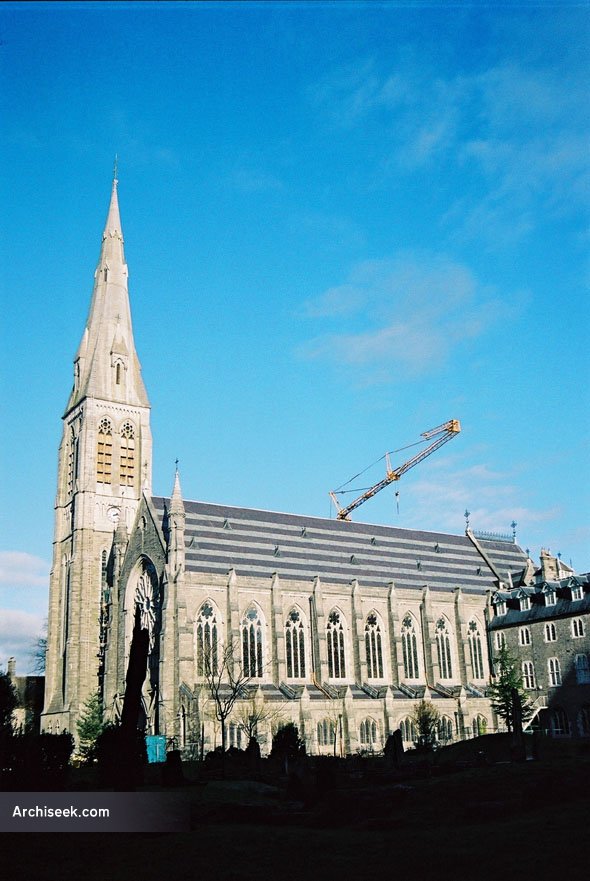 Started by 1875 by J.J. McCarthy, often called the Irish Pugin, and finished both after his death and the death of his successor William Hague in 1905. Hague, as at Monaghan Cathedral designed the tower and spire in 1895 and built in 1902-05. The contrast between the chapel and the three sides of St Mary’s Square by Pugin is worth noticing. Although still restrained, McCarthy’s fourteenth century French Gothic is much less severe than Pugin’s work.

The architect for the interior was William Hague. Hague was chosen after the following architects were invited to furnish plans in competition for the completion of interior of above building – G.C. Ashlin, W H. Byrne, C.J. McCarthy, J.J. O’Callaghan, J.L. Robinson, William Hague, and Goldie & Child.

The greatest feature of the interior the stained glass windows. They were supplied by three firms, Mayer from Munich and Lavers and Westlake and Cox Buckley and Co. from London. The five apse chapels are a notable feature of the design. The central one, the Lady Chapel, has mosaics depicting the life of Our Lady, carried out with Italian glass by Earley Studios of Camden Street, Dublin.