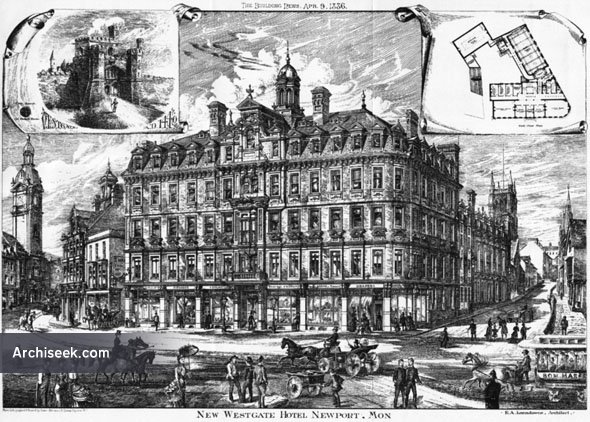 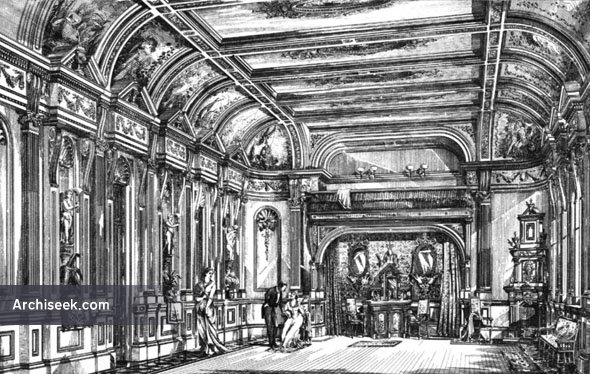 Hotel designed by local architect E.A. Lansdowne. “This building stands on the site of the old Westgate Hotel, at the corner of Stow Hill, and Commercial Street., the foundation stone being laid by Mr. E J Grice, the chairman of the Hotel Company.

The whole of the site has been excavated, and the basement utilised for stores to shops, kitchens, offices, stores, cellars &c. Owing to the site being one of the best in the town for business purposes, the ground floor, facing Commercial Street, has been devoted to six shops, in the centre of which is the main entrance to the hotel. At the back of shops are manager’s rooms, grill room, sitting room, luggage room, commercial room, smoking room, stock room, entrance from yard, lavatory, passage to billiard room, small bar (facing Stow Hill), grand open stairs, and main bar.
The first floor is approached by stone stairs, supported by polished Shap granite columns with carved caps, and contains coffee room, drawing room, three private sitting rooms, serving rooms, four stock rooms, and large ball room; the billiard room being on this level but approached from floor beneath.
The second floor is approached by stairs as before, and has, facing Commercial Street, seven large bedrooms, averaging 22ft. by 14ft. 6in., with 12ft. head room, and four other bedrooms, averaging 18ft. by 14ft.; also servants’ closets, stores luggage room, bathroom, lavatory, &c.
The third floor is reached by stairs as before, and contains twenty eight bedrooms, averaging 22ft. by 14ft. to 12ft. by 12ft.; bathroom, housemaids’ closets, luggage room, w.c.’s, lavatory, &c.

The fourth floor contains fourteen bedrooms, averaging from 22ft. by 14ft. to 13ft. by 10ft., with bathrooms, luggage room, w.c., lavatory, &c.
The attics contain six large servants’ bedrooms. In the open yard at the back of the hotel is provided a large coach-house and stabling fro ten horses, public w.c., urinals, &c.; also back entrances to kitchen and first and second floors to hotel. The elevations facing Commercial Street, Stow Hill, and two ends are built with local Pennant stone in small random rockwork, the beds and joints being punched, the whole of the dressed stone being in Beer stone from the quarry at Seaton.
The work of construction has been carried out by Mr. John Linton, builder, of Newport, from designs and under the supervision of Mr. E A Lansdowne, architect, Mr. Lewis Hall acting as clerk of works. The hotel is leased to Mr. Samuel Dean, of the Castle Hotel, Newport, for twenty one years.” The Building News April 9, 1886