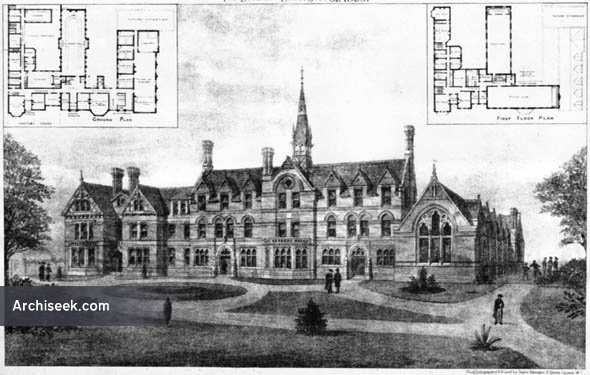 Perspective view including ground and first floor plans as published in The Building News, July 31st 1885.

The Main Building, which accommodates School House, and the School Room, which was converted for use as a chapel in 1936, were constructed in two stages in 1887 and 1900. The stained-glass windows in the chapel depict things incorporated in the school’s badge. In 1938 a fire caused substantial damage to the Main Building with the central spire collapsing. It was not replaced during reconstruction. In 1920 the school was acquired by the Board of Management for Methodist Residential Schools. Buildings forming a quadrangle were subsequently erected to the rear of the main building and the chapel.

Now known as Kent College and is still a Methodist school, although it accepts pupils of all religions. Originally established as a boys’ school, it took girls into the sixth form in 1973, and since 1975 it has been fully co-educational.