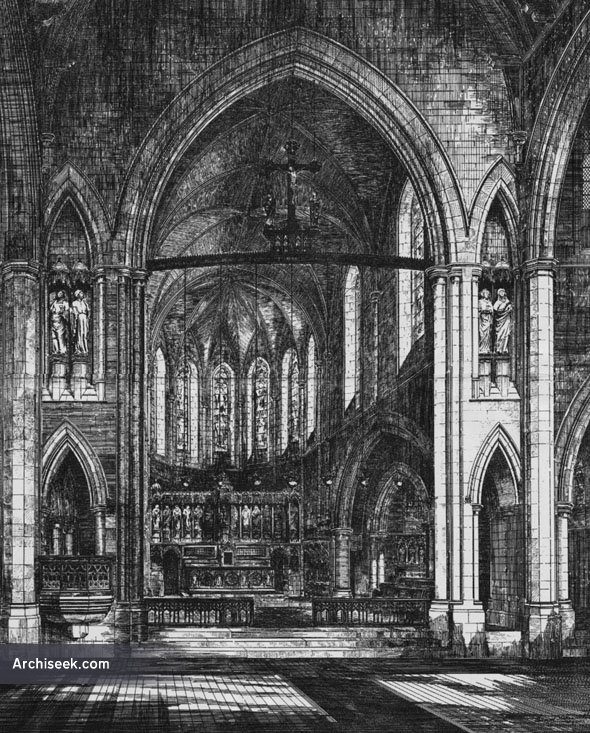 “We illustrate this week the west front of a new Catholic church, about to be erected in South-street, Exeter. Owing to the rapid fall of the ground, a narthex enclosing a short flight of steps was found to he the most desirable form of entrance. A lofty tower at the west end of north aisle forms a baptistery, and is crowned by an octagonal lantern, which is to be constructed of stone, with a framed wooden roof, carried well down inside the octagon, and covered with lead, laid diagonally on small rolls. It is proposed to build the walls throughout of Pocombe-stone, faced externally with grey limestone. The
open timber roof to nave is to be constructed with arched principals, framed into short hammerbeams, and carried down to springing of clerestory windows. The chancel, with its apse, has a groined ceiling, formed of oak-ribs. The arrangement of the chancel arch and narrow- side arches results from the chancel being planned narrower than the nave, and this with the side-chapels, which arc separated from the chancel by a double arcade, will form a prominent feature in the interior. A gallery for the organ is provided in the south transept, reached by a staircase, leading from a lobby which forms an exit from the church in case of fire — this being a requirement of the local authorities. Mr. Charles E. Ware, Mem. In.at.C.E., and Mr. Leonard Stokes are the joint architects for the work. The drawing by Mr. Stokes, from which our illustration U taken, was hung in the late exhibition of the Royal Academy, and has already been noticed by us.” Published in The Building News, September 28, 1881.