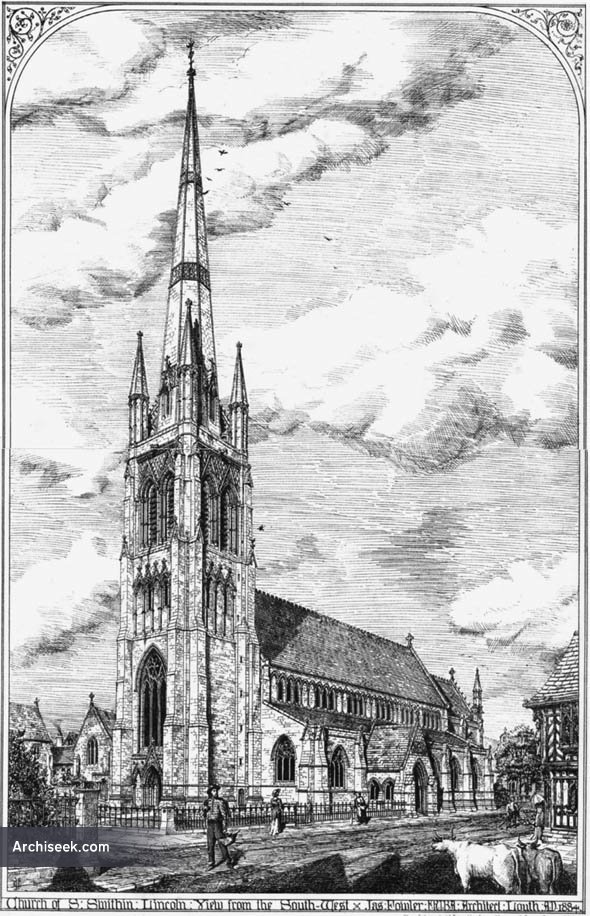 View from the southwest as published in The Building News, December 5th 1884.

From The Building News, 1868: “HE parish church of St. Swithin was at one time the largest and handsomest in Lincoln. It consisted of a nave with north and south aisles and chancel. The tower, containing a peal of bells, stood at the west end of the nave, and was remarkable for its good proportions. This building continued in good repair until 1644, when it was destroyed by fire. The ruin was left standing for some years, until the tower was considered unsafe from the weight of the bells it held, and was consequently pulled down and the bells sold.

In the Bodleian Library at Oxford there is a sketch by Buck of the ruin in the year 1720, which shows the remains of the south side of the nave and a handsome ^east window ; it appears, too, from this sketch that the parishioners had roofed in a portion of the south aisle for the pur- poses of Divine service. The present little church was completed in 1801, when the population of the parish numbered only 940. From that time the parish h.as been gradually increasing in importance until it has become by far the most populous in the city and now contains upwards of 7,000 persons, and the only church accommodation for this large number is the little building above mentioned, which is estimated to seat about 270 persons.

At various times during the last seven years attempts have been made to build a large new church, but all these attempts proved unsuccessful,
until the present incumbent (the Rev. G. H. Pratt) commenced the work in earnest, shortly after his appointment to the living. He has been so far successful as to obtain a most valuable site adjoining the present churchyard and opening into the widest and most commanding street in the city. A very effective design has been supplied by Mr. Fowler, of Louth, who won the competition against ten competitors. The work is to be carried out in three separate contracts : — 1. The nave and aisles. 2. The chancel and vestry. 3. The tower and spire. The whole is estimated to cost from £7,500 to £8,000. “