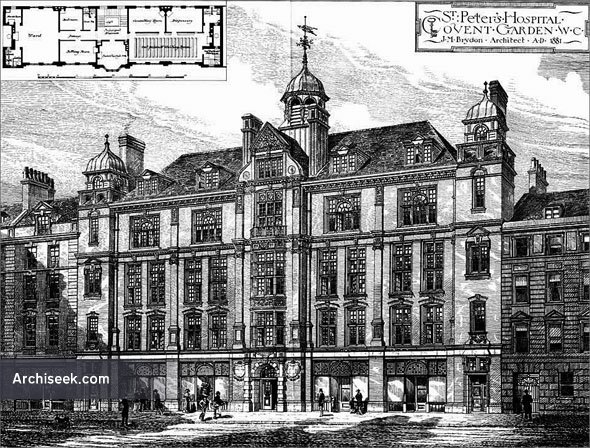 “This hospital, which is devoted to the treatment of stone and diseases of the bladder, and has been established in Beruers-street for the last 20 years, is having the new building, shown in our illustrations, erected in Henrietta-street, Covent Garden. It will contain 40 beds, besides accommodation for the out-patient department. The latter, together with the secretary’s office, board-room, &o., is on the first floor ; the principal wards being on the second floor. The kitchen, offices, smaller wards, and operating theatre are on the third floor, with the nurses’ and servants’ s;eeping-rooms above. The principal entrance is in the centre, and the entrance for out-patients on the right. The building will be constructed in the most substantial manner ; all the floors being fireproof on Messrs. Homan’s system, and the greatest care has been taken to render its sanitary condition as perfect as possible. It is also the earnest desire of the committee to impart to the new hospital more of the special character which has hitherto distinguished their present house, viz., a home for the sick, such as may recommend it to patients whose means may be small, but whose position in life is somewhat higher than the class usually admitted into hospitals. The general front of the building is in red brick, some portions, such as the entrance doorways, and the base plinth and cornice of ground- floor being in Portland stone. The total cost will be about £15,000; the general contract has been taken by Messrs Patrick and Son, builders, of Westminster.” Published in The Building News, June 24th 1881.