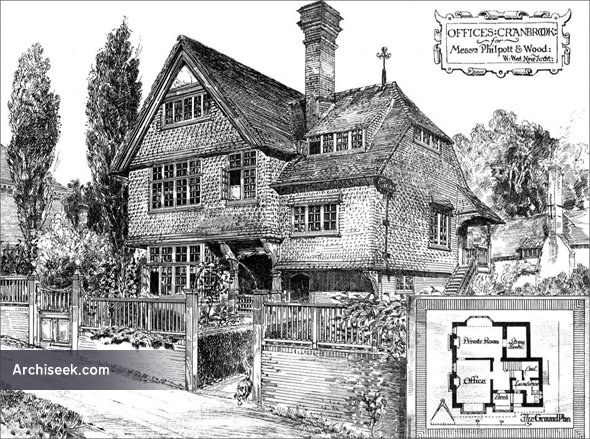 Offices built for for Messrs. Philpott & Wood. “This building, which was completed last autumn, was designed with a twofold purpose : firstly, to be used as solicitors’ offices— at the same time 80 planned that with the addition of a kitchen and scullery, built out by the side of the strong- room, it could be easily converted into a private house at any future time. It is built of red bricks; the walls on the ground-floor being hollow, the upper portion being all weather-tiled. The porch forms a striking feature, and is panelled to a height of 5ft.; all the woodwork is Oak, with a tiled floor. The rooms over the strong-room and lavatories are entered off the half-landing. The first floor in front overhangs 4 ft., thus increasing the size of the rooms very considerably. The outside staircase leads up to the caretaker’s rooms ; the living-room, being over the strong room, can also be entered off the half-landing. The building stands well back from the road, and has a garden front and back. The original drawing now in the Academy was designed by Mr. W. West Neve.”