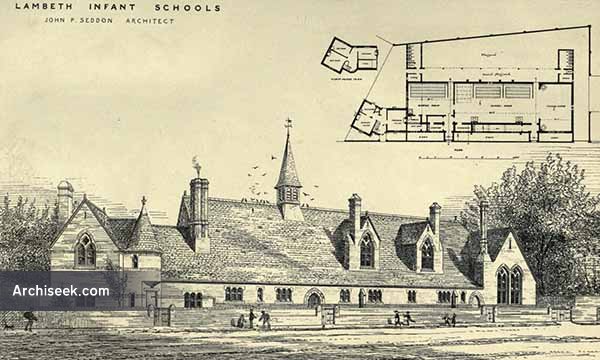 “The new infant-school buildings of St. Mary’s, Lambeth, have been erected upon a site kindly given by the Archbishop of Canterbury, with a frontage to the high road, a little beyond the church and Palace. The necessary funds were supplied mainly by the accumulated stock belonging to Archbishop Tenison’s School, in the hands of the Charity Commissioners, by whom permission was granted to the trustees for its appropriation to the above-named purpose. The buildings are from the design of Mr. John P. Seddon, architect, of No. 1, Queen Anne’s-gate, and were erected by Messrs. Belham, builders, of 155, Buckingham Palace-road. The accommodation provided is for 300 children : and consist a large schoolroom 54ft. by 25ft., and two large classrooms, to one of which is attached a small room to serve as a creche for the very little children, who, when wearied, may sleep there quietly.

There is a playground behind, part of which is covered over. ‘J he buildings are well heated throughout by stoves and lighted by gas, and the walls decorated and hung with pictures to give a cheerful aspect. In one of the class- rooms the end group of windows is filled with stained glass, the gift of a friend of the school ; one couplet, in memory of Mrs. Tait, represents Christ receiving little children, and the other, to Archbishop Sumner, with subjects bearing upon “Faith working by Love.” At one end of the group of buildings is a mistress’ residence, fitted into an irregular portion of the ground in a somewhat picturesque manner. The entire cost of the structure and its contents has been about £2,500. The materials are stock brickwork relieved with red bricks, and the roofs are covered with tiles. The site having been a portion of the Lambeth Palace grounds, there is a background of foliage giving a pleasant rural appearance in the heart of the metropolis. The Bishop of Rochester, at the recent opening of the schools by the Archbishop, stated that they were the best group of buildings of the kind ho had seen, and that by their picturesque and yet modest, unpretending character, excelled the much larger and more costly piles of buildings in their neighbourhood.” Published in The Building News, March 4 1881.