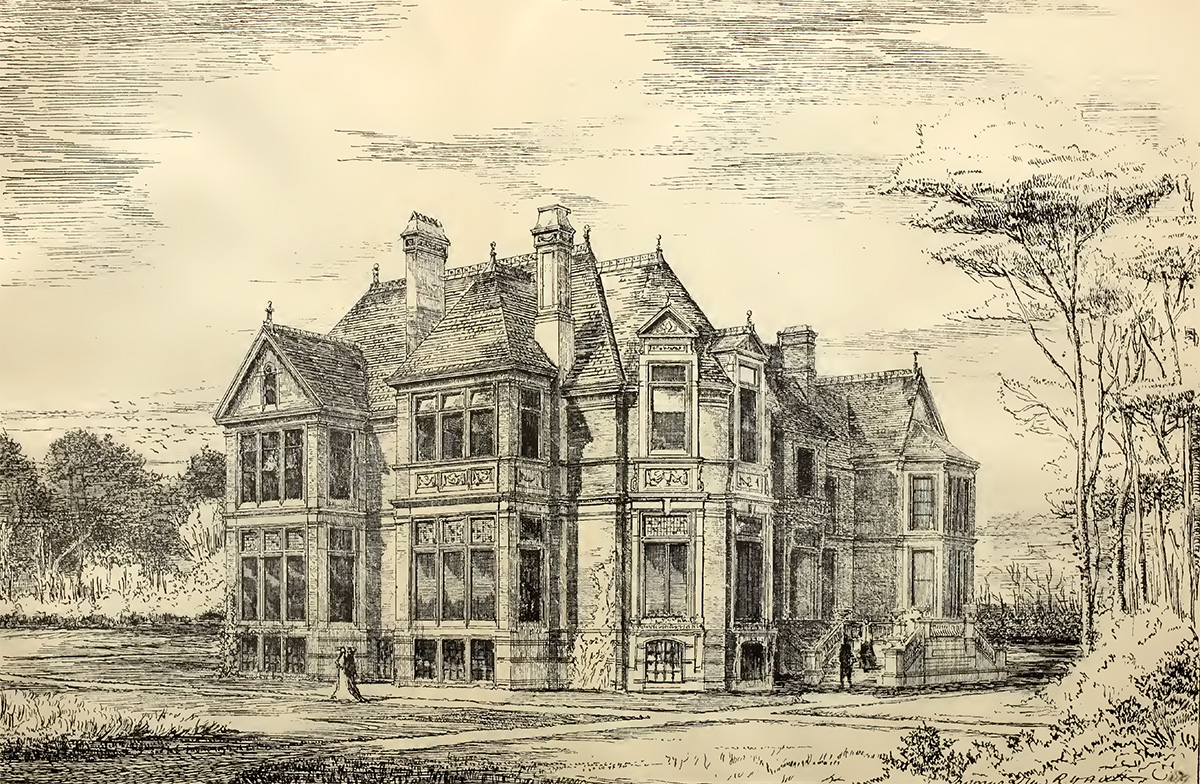 House designed for Gibson Black, hence the name of the house. Now part of the Incorporated Orthopedic Hospital of Ireland, and houses administration offices and storerooms for the hospital and surrounded by more modern buildings.

“The original bouse was erected only a few years back by Mr. Drew, and is of somewhat-plain Italian style, with some interior details of what would be now called ” Queen Anne ” character, but which were then in advance of the semi-developed fashion. The additions now being made are intended to re-cast the whole house on a larger and more important scale, an operation requiring some ingenuity in planning to accomplish successfully. Of the additions entirely new, the large drawingroom appearing prominently in the sketch will be the most important feature. The room proper will be 36ft. long by 20 ft. wide, with a large bay on each side which will make it practically about 36 ft. by 40 ft., and 16 ft. high. It is to be finished with details of Renaissance character, pilasters, coved ceiling, &c. Mr. Thomas Pemberton is at present the contractor for the building itself, at about 3,800. A large staircase of pitch pine and elaborately-carved walnut promises to be an effective architectural feature.” 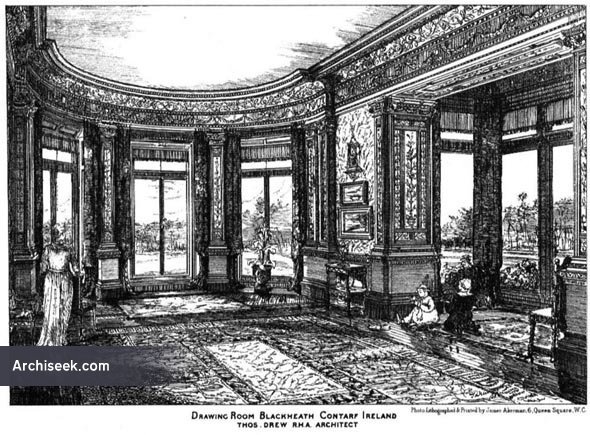 Interior view including ground plan & key. Published in The Building News, March 4th 1881. “This sketch gives the interior of a ball-room, which forms part of additions to this house be- fore illustrated in the Building News. The apartment terminates with a semi circular end, as shown in the view, and has a large bay window on one side, and on the other an ante-room or recess bay, opening into the ball-room proper. The room is about 40ft. long, and 40ft. measured across the bays. The pilasters throughout are framed with moulded walnut stiles and panels of delicate Cinquo-cento-like work, in low relief in sycamore; it being intended to body-in the ground in low-tone colour, leaving the sycamore in the carving of its natural colour. Dublin has been always famous for its beautifully free and artistic stucco- work of the last century, the work of Italian settlers and French refugees, and it is much to be regretted that before this all disappears, some enterprising artist does not undertake the drawing and publication of some of the good examples of ceilings, &c., hundreds of which remain in private houses and elsewhere; while in the last few years hundreds have disappeared. An effort has been made in the stucco-work work of this new ball-room to revive something of the high artistic character and freedom of modelling suggested by old examples, and all the enriched work has been specially modelled by Messrs. Sharpe and Emery, architectural sculptors, of Dublin, and finished by a carver ; some of the details, such as birds, &c., being fixed in rough plaster and carved in their places. The result has been work of more than ordinarily good artistic character, at a by-no- means extravagant cost. The architect is Mr. Thomas Drew, R.H. A., of Dublin.”