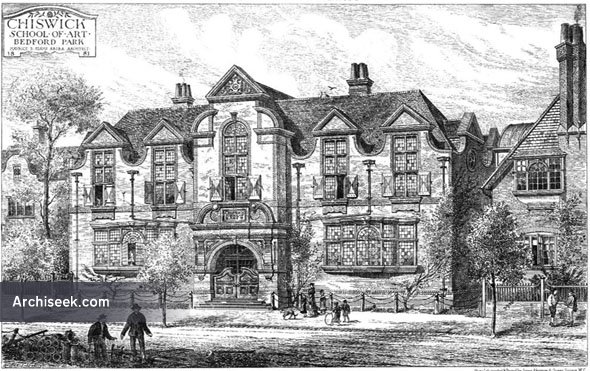 This was one of the public buildings on the Bedford Park estate intended to give the new development a sense of community. Designed by Maurice B. Adams it opened in Bath Road in 1881. Among other subjects it offered ‘Freehand drawing in all its branches, practical Geometry and perspective, pottery and tile painting, design for decorative purposes – as in Wall-papers, Furniture, Metalwork, Stained Glass…’ Pupils included the brother and sisters of Irish poet W.B. Yeats.

“The new School of Art, now in course of erection at Bedford-park, is situated on a commanding site, having a frontage of about 90ft. in the Bath -road, almost adjoining the Bedford-park stores and church. To-day we have reproduced the plans and front elevation of the portion now being built. Larger class-rooms are proposed for erection at the rear of the present structure, and extending to the frontage secured to the site by the roadway at the back of the premises. The purposes for which the several studios are in- tended will be found written on the plans. The office of the care-taker commands the entrance on all sides, and the hall and staircase are arranged with a view, not only for present requirements, but for their ultimate uses when the future extension is completed. The stairs are oft. wide, and have teak treads. A heating – chamber is provided under the gentlemen’s lavatory, and hot – water pipes will warm the entire building, excepting the master’s room, where an open fireplace is to be used. The style chosen for the school is in harmony with the houses and other public buildings erected on the estate, though rather a later type of old English building, has, perhaps, been taken as a suggestion for the elevations.

To secure harmony with the surrounding buildings, which are from Mr. Norman Shaw’s de- signs, the plans for the new school of art were submitted to Mr. Shaw, and received his approval before the work was commenced. The entire building is being built in red brick, with cut-brick archways, pediments, strings, and copings, the sills and upper surfaces being covered with lead. The roof is to be covered with green slates, and the windows throughout are to be glazed with clear glass, in square quarries, larger in size really than the scale of those shown in our present elevation. The architect from whose designs, and under whose superintendence, the school is erecting is Mr. Maurice B. Adams, A.R.I.B.A. Mr. E. S. Burchett, of South Kensington Museum, is to be the head-master, in conjunction with Mr. F. Hamilton Jackson, of Bedford-park, and late of the Slade schools. The Duke of Devonshire is the president, and among the vice-presidents are Lord George Hamilton, M.P., ihe Marquis of Bute, Leopold Rothschild, Esq., and the Right Honourable A. J. B. Beresford Hope, M.P. ” Published in The Building News, January 21st 1881.