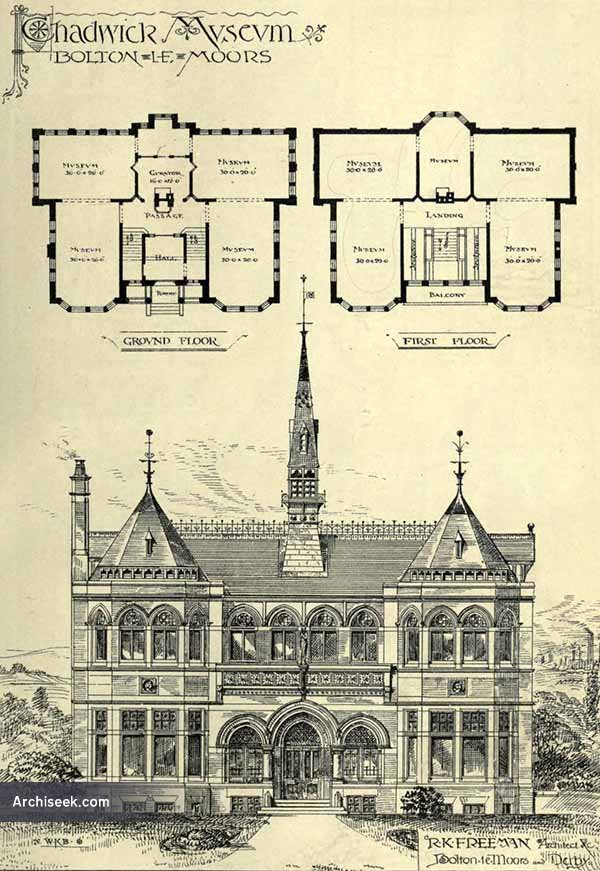 “This museum is the gift of the late Dr. Chadwick, and was erected for the Corporation from the design of Mr. E. Knill Freeman, Bolton, selected in open competition. The main entrance is placed in the centre of the principal front; it is in the form of a recessed porch. The hall, 14ft. by 12ft., opens by means of large folding doors into a corridor I Oft. wide, having at either end the entrance to the lower museum.

The staircases, of good width, leading from the lower to the upper museum, open out on each side of the corridor, and meet in a central flight over the entrance-hall. Directly facing the entrance, and separated from the corridor by a glazed screen, is the curator’s room, the position and arrangements of which have been specially considered with a view to supervision. Glazed screens at either side give the curator control of the approaches to the museum and staircases, while small angle windows enable him to see what is taking place in the various rooms. The museum is divided on each floor into four rooms 30ft. by 20ft., connected on the side next the park by a wide corridor, having on the ground-floor an entrance from the park, with a large oriel window over. Visitors are thus enabled to go through the museum, entering at one side and leaving at the other without confusion. The plan of the upper floor is similar to the lower, except that a sculpture gallery is provided on the corridor and staircase landings. In the basement, which opens from the park at the lower level, are rooms intended for geological museum and for other heavy specimens, also apartments for the porters, heating-cellars, &o. The materials employed are brick, with red Runcorn stone dressings, moulded bricks and terra-cotta ornament being used in string-courses, panels, &c. The roofs are slated with North-Country green slates. The upper parts of the windows are glazed with lead- work of an ornamental character. The internal fittings are of pine, painted, the floors of entrance and corridors being of marble mosaic. The contract was let to Mr. Joseph Robertshaw, of Bolton, for £4,485, and the works have been carried out by him in a satisfactory manner.” Published in The Building News, March 25 1881.