Architecture of Tyne and Wear 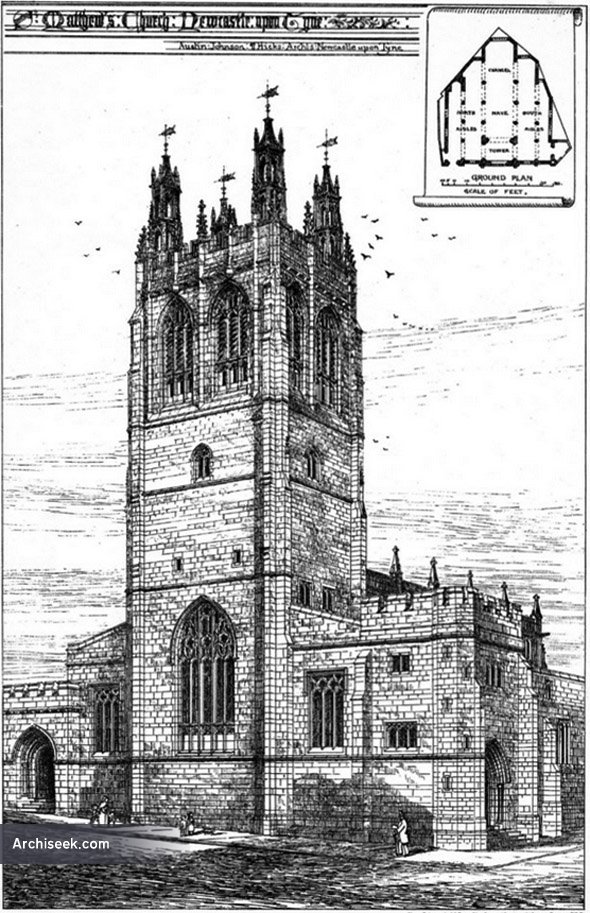 “This church, as will be seen from the plan, has been designed for a very peculiar and restricted site, which is surrounded by buildings on every side except the west. Advantage has been taken of the circumstance that the longest dimension of the site is from east to west, to take that as the axis of the church. This is arranged with a nave and chancel, each 25ft. wide, and both measuring 4Sft. to the ridge of the roof internally. On each side are two aisles, the inner ones being lighted by a second clerestory. The vestries are below. The whole accommodation will be for about 750 adults. The church is to be finished inside in ashlar stone throughout. At present, the east end and part of the chancel and side walls, with some of the nave pillars, are alone built. The western part is temporarily roofed in and enclosed, and the whole area thus provided is seated with chairs. The permanent arrangements have, however, been made as to levels and altar-steps. The structure thus temporarily finished was consecrated in May last, and funds are being raised for the further completion of the fabric. At the proper time, this work will be undertaken from the outside, and carried on without disturbing the congregation. The stone pulpit shown in the drawing, and a font of Purbeck marble, with other matters, have been special gifts to the church. Messrs. Austin, Johnson, and Hicks, of Newcastle, are the architects.” Views published in The Building News, December 17th 1880.