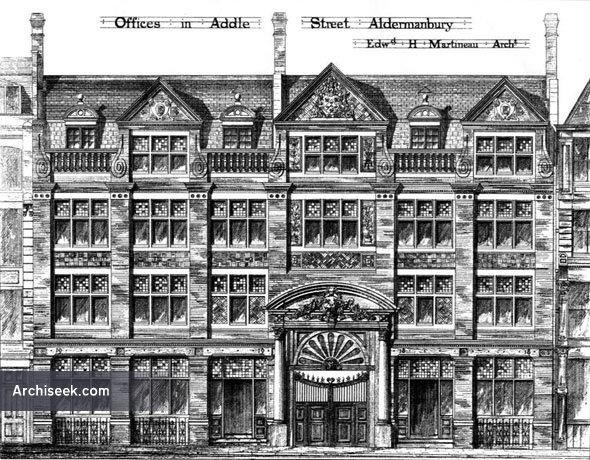 Perspective view published in The Building News, December 3rd 1880. “The two houses Nos. 18 and 19 in the street, the front elevation of which we give as our illustration, have been built by the Brewers’ Company, from the designs and under the superintendence of Mr. E. H. Maitineau. Th enew buildings have taken the place of two old houses which had to be pulled down, and which had nothing of interest about them with the exception of the old gateway-entrance to Brewers’ Hall. This old doorway complete, with its Corinthian-capped columns and entablature surmounted by curved pediment, was carefully preserved, kept up, and incorporated with the new design. The new building’s present a mixture of red brick and red Mansfield stone, the cornices and strings being of moulded bricks ; ornamental red terra-cotta panels, specially made by Messrs. Blanchard from the architect’s designs, are worked in with the brickwork. Portland stone is used for the dressings of windows in the stories above ground-floor story. The carving on stone shields in the pediments, in the principal one of which are the arms of the Brewers’ Company, was executed by Mr. L. T. Carter. Mr, E. Lawrance was the contractor, and Mr. T. Spooner, the clerk of works. The back of these two houses forms the south side of the courtyard of “Brewers’ Hall,” which was built soon after the Fire of London, and is rather a curious specimen of the period. We shall hope in some future number to be able to give illustrations of the old hall, from Mr. Martineau’s sketches and drawings.”