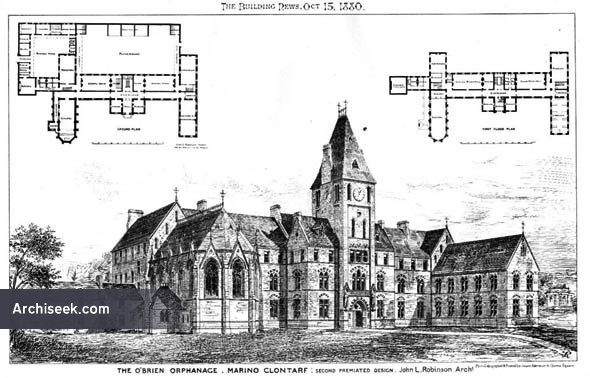 Now known as the O’Brien Institute, this building was to serve as an orphan home and school, financed by a trust that was founded by Bridget O’Brien in 1876. The architect hired was J.J. O’Callaghan, who submitted two designs, with the building being largely completed by 1883. Today the buildings are used as Training centre for the Dublin Fire Brigade.

“An eccentric lady named O’Brien, having died some years ago, bequeathed a considerable sum to the late Cardinal Cullen for the foundation of an orphanage for middle-class children. Shortly before his death, the Cardinal acquired for the purposes of the charity the estate of the Earls of Charlemont, at Marino Clontarf, a short distance from Dublin, on the Howth-road. The death of the Cardinal, and other circumstances, prevented any steps being taken to give effect to the will until the spring of this year, when the present Archbishop of Dublin, the Most Rev. Dr. McCabe, invited seven Dublin architects to submit designs.”

“One of the principal conditions was that ‘The school should be capable at its opening to accommodate 50 boys, but to be so arranged that, if funds permit, it may be enlarged hereafter, to give accommodation to 50 additional.’ As maybe seen from the key plan, the portion to the right of the central block being for advanced pupils, was to constitute the future extension. The upper plan provided four large dormitories, with bath-rooms, w.c.’s, master’s apartments, and a large prayer-hall or oratory, for morning and evening prayer. The materials proposed were a dark-coloured limestone for the general body of the walls, with white or bluish limestone dressings. The estimated cost was £15,000. The author of the design is Mr. John L. Robinson, Great Brunswick-street, Dublin. ”