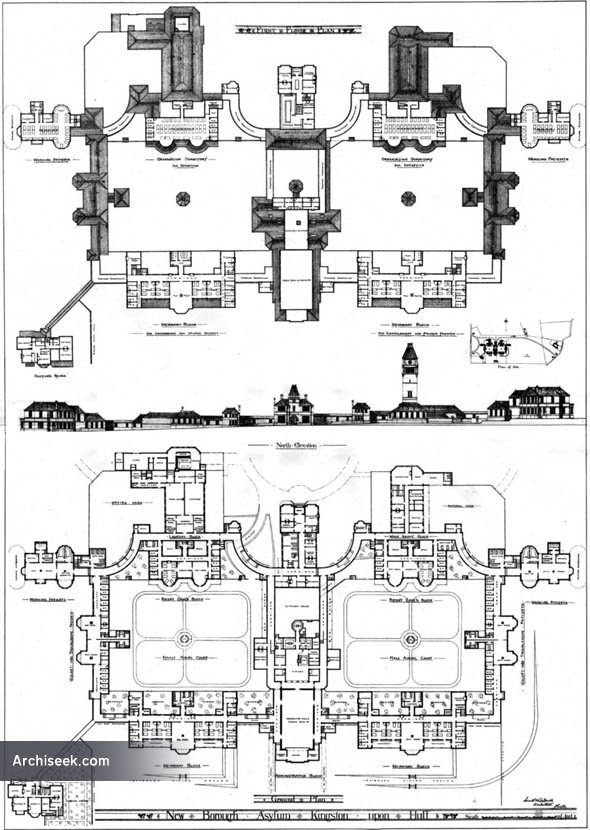 The buildings enclose a double square, furnishing on either side a roomy airing-ground for the more troublesome of the patients. The central portion runs from south to north in the following order : — The southern central position is occupied by the amusement and dining-hall, which projects in front of the rest of the asylum. Next comes the kitchen divided by a corridor from the dining-hall and sculleries, together with the bakery, flour stores, general grocery stores, vegetable and potato-room, larder and dairy. Over the larder and dairy, &c., are the bedrooms for the cook, kitchen-maids, housemaids, and the patients employed in the kitchen. On either side of the kitchen run the connecting corridors, through which the patients pass to the dining and recreation hall. The attendants’ mess- rooms open into these, one for each division, and are conveniently placed in close proximity to the kitchen, with the cook’s room adjoining. Next in the middle line we come to a suite of rooms comprising the surgery and patients’ visiting- rooms. These, with the kitchen and corridors, enclose a square in which stands the detached meat-larder.

A subway opens also into square, and allows the meat, vegetables, coal, and other provisions to be readily brought to the kitchen and general stores. Finally, we have the block which contains the general stores, the clerk’s office and sitting-room, the porter’s- room, general waiting-room, committee-room, and superintendent’s-office. Over these are placed the clerks’ bed-rooms, two spare bed- rooms, the chaplain’s-room, library and porter’s bedroom, &e. The infirmary blocks are two- storied blocks, and are somewhat after the plan of the new infirmary blocks in the Durham County Asylum, which were highly commended by the Lunacy Commissioners. The floors provide all necessary accommodation for patients, including a central day-room with four small dormitories, six single rooms, two attendant’s-rooms, a kitchen and scullery, and a small visiting-room on each floor, where those patients who are too infirm to be taken to the general visiting-room may see their friends. The importance of a kitchen for the infirmary is now generally admitted. It allows the serving of beef -tea and all extra diet to be easily accomplished at any time of the day or night, and contributes immensely to the comfort of the .sick and infirm. The bath-room, lavatory, and water- closets are in a detached building on the north side of the infirmary with a lobby which admits of cross ventilation. The block for violent and troublesome patients is placed on the outer side of the square, and consists of a large dayroom with two adjacent corridors, which can be closed by glass doors, and used as separate day-rooms if necessary. In connection with this ward are twelve single rooms and two attendants’ rooms.

The store-rooms, closets, urinals, and lavatory are in a detached block, with gallery for cross ventilation. This ward provides accommodation for some of the more violent of the epileptic class. The arrangement is the same for both sexes. The blocks for chronic and working patients have on the ground-floor three large day-rooms, opening one into the other, together with a spacious lavatory and boot-room, stores, and attendant’s-rooms. The general bath-room is closely adjoining, and with its roomy dressing-room is so placed as to serve for both these and the preceding blocks. The water-closets are detached as in the other blocks, with cross ventilation between them and the daj’-room. On the first floor are the dormitories, lavatory, a single bath, store-rooms, and attendant’s rooms. The blocks for recent cases are built out in front of the connecting corridors, so as to enjoy a southern aspect and to leave the corridor free for traffic, and to avoid what the architects consider the worst feature of some modern asylums, viz., a subway or covered way. They consist of a suite of rooms on the ground- floor, a day-room, dining- room, and dormitory, seven single rooms, and two attendants’ rooms, a scullery, stove and bath-rooms. The lavatory- and water-closets are detached as in the other blocks. On the first floor are the epileptic and suicidal dormitories, single rooms, attendants’ rooms, lavatory and closet. They are designed in strict accordance with the Lunacy Commissioners’ suggestions.

It will be seen that no special day-room accommodation has been set apart for the epileptic patients, the architects’ medical advisers being of opinion that it is better on the whole (especially in a small asylum) to divide the epileptic population over the general wards according to their peculiar dispositions. The violent would, there- fore, be placed in the ward for the more trouble- some, the quiet and well-behaved in the working block, the feeble in the infir nary. The general dining-hall, recreation-hall, and attendants’ messrooms are placed where they alone ought to be : near to the kitchen and sculleries, thus ensuring due supervision by the housekeeper, and adding immensely to the comfort of the patients and attendants by facilitating the serving of the food whilst it is hot. The assistant medical officer’ s rooms are placed near to the reception-wards where the cases requiring most supervision are under treatment. The head attendant’s rooms are centrally situated, being near the dining-hall and mess-rooms, and in the neighbourhood of the infirmary blocks. The medical superintendent’s house is near the south-west angle of the building, being connected to the female side near the infirmary by a short corridor.

The church is some little distance in front of the recreation-hall. Most of the wards are provided with verandahs for air and exercise without exposure ; this feature is especially useful in the infirmaries and receiving wards. The laundry is situated on the north side of the corridor, near the female working and receiving blocks. It is capable for washing for 400 people, and is fitted with washing and ironing-rooms, sorting-rooms, foul laundry, with separate approach, male and female receiving and delivering- rooms, and drying closets, &c., and is to be fitted up by Messrs. Bradford and Co., of Manchester. The exhaust and steam from the engine will be used for heating the drying closets and hot-water circulation to day-rooms, single rooms, and corridors, and the condense from the same will be used for the boiler feed, thereby effecting an economy in fuel, and reducing the deposit in the boiler. The shaft for boiler has a ventilating flue at sides for drying-closet. A thorough system of ventilation is arranged, the rarefying power being supplied from the boiler and kitchen chimneys, and tubes are taken into the various rooms, fresh air being admitted by means of vertical tubes, the air in the winter passing over the hot-water pipes. Messrs. G. Jackson and Son, of Hull, are the general con- tractors, and the other contracts have been taken by Messrs. Haden and Sons for the general engineering, Messrs. Benham and Son for the kitchen fittings and stoves, Messrs. Bradford will fit up the laundry, Messrs. Porter and Co., of Lincoln, the gasworks. The architects are Messrs. Smith and Brodrick, of Hull (assisted by Dr. Wallis, the medical superintendent of the county asylum, at Whittingham, in the original arrangement of the plans), who obtained the work in competition, their plans being selected by a referee appointed by the magistrates on the recommendation of the Luna?y Commissioner,*. The cost is about £-50,000.”