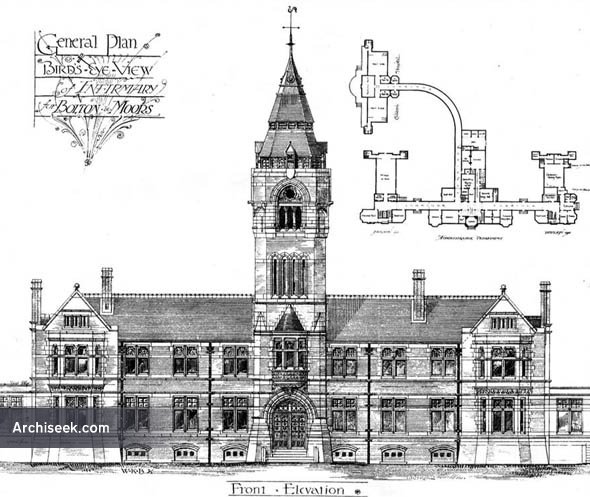 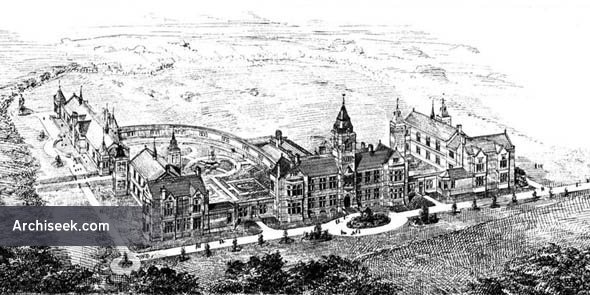 “The new infirmary at Bolton, which we illustrate, was commenced in the spring of 1879, and, in all probability, the building will be ready for occupation by autumn next. The infirmary consists of four distinct buildings — viz., the administrative block (which is placed in the centre), the right and left pavilion, and the Children’s Hospital (at the back of the left pavilion) . The corridors connecting them are our story only in height, so as not to interfere with the free circulation of air. The administrative block contains on the ground-floor the principal entrance-hall, board-room, secretary s office, matron’s and surgeon’s day-rooms, operating- room, and small occasional ward, also the kitchens, larders, servants’ hall, lavatories, &o. The upper floors are appropriated for surgeon’s, matron’s, nurses, and servants’ bedrooms, with requisite bath-rooms, &c., the plan being so arranged that each department is kept thoroughly distinct. In the centre of the front, over the entrance-hall, a tower is carried up to a total height above the ground of 103ft. The upper portion of this could be utilised for water tanks. The right pavilion (that nearest the tower) contains the entrance for patients, with its accident-receiving rooms, &c , also the dispensary and out-patients’ departments. The latter consist of a large waiting-room, also medical and surgical, consulting, and examination rooms, lavatories, &c. The house -porter’s apartment is placed here, and is in such a position as to control both the entrances. A small ward, capable of taking three beds, is also placed on the ground-floor. On the upper floor is a large ward for H beds, and a smaller one for three bods ; also nurses’ day and night rooms. The left pavilion has on the ground-floor a large ward for 14 beds, and two occasional wards for three beds each, also nurses’ day and night rooms. The upperfloor is similar, but with only one small ward. Both the pavilions have bal- conies at the end for tho use of convalescents.

The children’s hospital, which has been placed so as to overlook the park, is a one-story building, containing two wards for eight beds each, a recreation ward or play-room, lavatories, 4c., also nurses’ day and night rooms. A terrace is provided, communicating with the wards for the use of convalescents. These wards are so arranged that they can be completely isolated from the main building. The sizes of the wards are as follows : —Large pavilion 69ft. by 27ft., cubic space for bed 1,820ft. ; small wards 22ft by 16ft. 6in., cubic space for bed 1,877ft.; children’s wards 35ft. by 26ft., cubic space for bed 1,700ft. The total number of beds is as follows: — Men’s wards, 42 beds; occasional wards, 17 beds; children’s hospital, 16 beds: total 75. The principal corridor extends from end to end of the building, with a total length of about 300ft.

The pavilions are provided with hydraulic lifts for patients, and hoists for raising dinners and coals to the upper stories. Shoots are also provided for dirty linen, dust, &c. Fireproof construction has been adopted throughout. The heating of the wards is by Hayden’s system of central fireplaces, which combine open grates with hot air and ventilation. In these and in all sanitary matters the most modern improvements have been adopted. The materials employed are brick, with Yorkshire stone dressings, and the roofs are covered with green slates from Elterwater. The amount of the contract is £13,250. The tender of Messrs. J. H. and G. Marsdcn, builders and contractors, of Bolton, was accepted. Mr. R. K. Freeman, of Bolton, is the architect.” Front Elevation & Birds eye view published in The Building News,January 14th 1881.