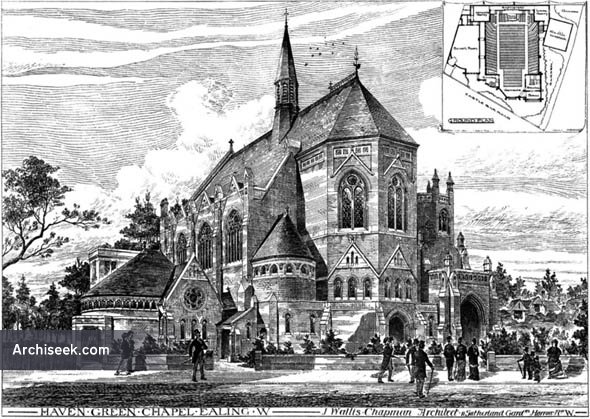 The buildings were designed by J. Wallis Chapman, who also built Baptist chapels at Watford, Wisbech and Paddington. T. Nye was the local contractor. Perspective view including plan published in The Building News, August 6th 1880. Still in use today by the congregation, it recently underwent external restoration and repair.

“This chapel is being built near the Ealing Broadway stations, under the auspices of the London Baptist Association. Its extreme internal dimensions are 83ft. by 51ft. Accommodation is being provided for 900 adults in the chapel (including galleries on three sides), and for 250 children in the school buildings, which include (besides the main school-room) three class-rooms and a separate Bible class-room. It was considered advisable to allow the small house adjoining to remain standing; this involved a somewhat unusual arrangement of the building, which will, however, have the effect of placing it to better advantage with respect to the roads which converge upon the site. The memorial- stones were laid on Aug. 3rd by the Rev. John Clihford, M.A., LL.B., B.Sc, Ex- president of the Association, and by Sir Thos. Chambers, Q.C., M.P., President of the Sunday School Union. The buildings are being executed in^ Portland cement concrete, faced externally with red bricks, with dressings of moulded brick and Bath stone. The chapel roof (the ridge of which is 55ft. above the ground) is in one “span 51ft. between the walls, partly wrot, and with a groined and waggon-shaped ceiling of white deal with yellow deal ribs. The cost of the freehold site has been nearly £1,500, and the cost of the buildings is expected to be about £5,500. ^ The works are being executed by Mr. Thos. Nye, of Ealing, from the designs and under the superintendence of the architect, Mr. J. Wallis Chapman, 11, Sutherland – gardens, Harrow-road, W.” Published in The Building News, August 6, 1880.