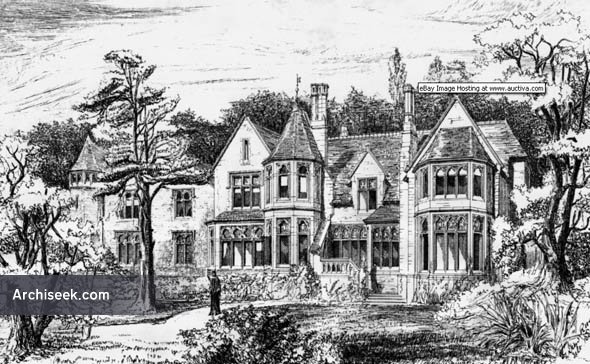 Now a hotel with a large modern wing attached, this, the garden front, is still largely unaltered. Designed by Irish architect Thomas Drew. “This house, the residence of the Rev. J. W. Hardman, LL.D., situated in the high country overlooking Clevedon and low-lying land west of Bristol, built about seven years ago, may be said to be jointly the work of the architect, Mr. T. Drew, and the owner, an ingenious archeologist. The house embraces a portion of a small villa house, previously existing, which has been gabled and worked into the general design. The newer portion of the house, consisting of the porch, screened hall, solar, staircase, dining-room, &c., is arranged on lines familiar in many plans of old English manor houses. Taken in connection with the circumstances that it has been built up in great measure of miscellaneous derelict gatherings of the owner, saved from destruction by him about his neighbourhood in past years, consisting of old fire places, mullioned windows, oak panelling, &c., all introduced with skill and ingenuity, it would easily be mistaken by many skilled ones for a very genuine old English manor-house. It seems a legitimate use enough of many interesting things which would otherwise have been lost, and this picturesque reproduction of an average old English house harmoniously contains an extensive and valuable collection of old English furniture, curiosities, and articles of art.” Published in The Building News, October 22 1880.