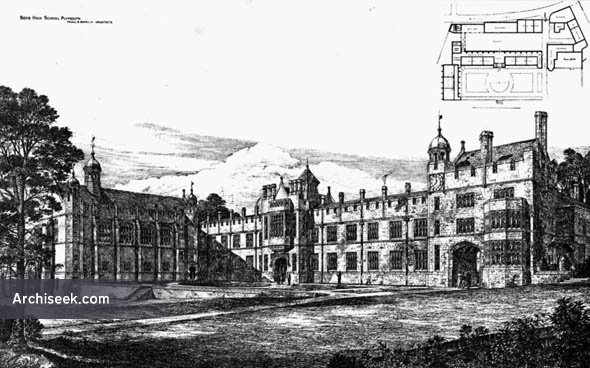 “Ix the laying out of a scheme for the accommodation of the Plymouth High School for Boys, the governors determined to make provision for future as well as present requirements. The structure is part of a whole — a fragment in fact. The entire design comprises 1.5 large class-rooms, each capable of accommodating 27 boys ; an assembly-hall, 40ft. by 70ft. ; a library and head-master’s room, 40ft. by 27ft. ; spacious principal and secondary stone staircases, board- room, assistant-master’s room, and pupils’ day- room : commodious di-ill-shed, three fives-courts, and large workshops, or chemical laboratory ; a residence for the head-master, a serjeant’s-lodge, and a dining-hall with all necessary culinary offices. The portion now in progress contains eight class-rooms, six being to the north, and two to the south of the central front entrance ; the library over the entrance-hall and the back wing containing the board-room. Sec. The principal front of the building faces south- west, and consists of a central entrance projecting four feet, flanked by a two-storied facade containing 24 large mullioned and transomed windows, lighting 12 class-rooms. At the southern extremity will be the head-master’s residence, extending over a carriage archway, which unites it to the main building ; and at the northern end will be the assembly-hall — standing at right angles — octagonal turrets rising up at the points of junction at both ends of the front, and also at the south-west angle of the assembly hall. The hall will be on the upper floor level, and underneath will be a range of three large class-rooms, each 3Gft. by 24ft. Over the spacious arch of the central entrance vestibule is a large oriel window, which will be the chief feature of the library or head-master’s room (to be used as an assembly-hall), and above this window will rise a gable flanked by chimney stacks, which are so designed as to play a very important part in the architectural composition. ‘The entrance vestibule is lined with Bath stone, and has a room on either side for the secretary’s office and the porter’s use respectively. The hall within is 27ft. square, and spacious corridors, 9ft. wide, extend from it right and left, and are lined with arched recesses throughout the entire length, with a depth of 4ft., for cloaks, hats, &c. From the central hall swing-doors lead out to the court in the rear of the main building, on the opposite side of which — and forming the boundary up to Mutley-lane — are the drill-shed, fives- courts, laboratory, workshops, &c. At the north end of this enclosed court or play-space (20.5ft. long by 50ft. wide) is a covered way connecting the class-rooms corridor with the drill-shed, lavatory, and conveniences, &c. In front of the building will be a level terrace, or fore-court, conterminous in width with the length of the Assembly Hall block, and supported by a retaining-wall which the fall of the ground necessitates. The walls are faced with lime- stone and Portland stone throughout. The works are being executed by Messrs. Blatchford and Son, of Tavistock, under the superintendence of the architects, Messrs. Paull and Bonella, of Ko. 9, Montague-street, London.” Perspective View including ground plan published in The Building News, August 6th 1880.