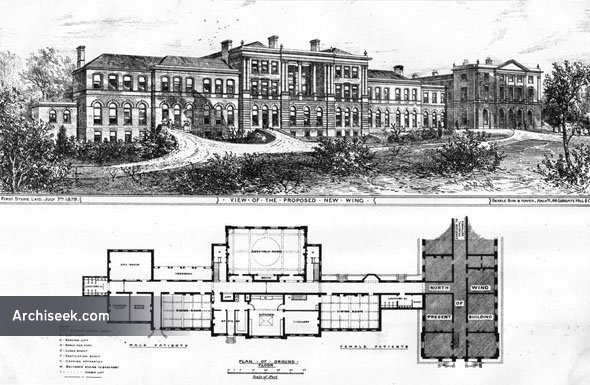 View of the proposed new wing including ground plan published in The Building News, July 4th 1879. The Hospital for Incurables was founded in 1854 by the distinguished philanthropist Dr Andrew Reed and moved to its current location, part of the Lord Spencer’s estate in 1863. Florence Nightingale advised on the design and the estate was supported by notable personalities of the day such as Charles Dickens, as well as several distinguished royal patrons.

The building on West Hill in Putney had originally been a hunting lodge (Melrose Lodge) and was purchased with 24 acres of land, on which, until the 1960s, the hospital operated a working farm. Much of the land has now been developed, but retained spacious landscaped gardens for the use of patients and residents. In 1995 the name was changed to the Royal Hospital for Neuro-disability.

“Tins building, of which a view and plan are given, is 260ft. in length, and placed at right angles to the present hospital towards the north end. The first stone is to be laid on Monday next, 7th inst., by the Prince of Wales. The accommodation provided upon the ground-floor is shown on the plan — on the basement-floor are the men-servants’ and porters’ living-rooms and dormitories, and extensive storage and wanting apparatus rooms, &c. The upper floors are utilised for patients’ wards, and will provide accommodation for about 100 more inmates, the allowance being about 1 00 superficial feet to each bed, and not less than 1,200 cubic feet of air space. The corridors throughout are to be of fire-proof construction in iron and concrete, finished on the surface with patent Victoria stone and red-tUe borders. The upper floors will be approached by a hydraulic lift as well as spacious staircases, and ample provision against fire will also be made. The new buildings have been planned with a view to further extension at some future time, at the end farthest from the present building and to correspond with the same — so that the new wing may be considered as the central block of what the complete Institution will it is hoped eventually become — the proposed new frontage being towards the high road. The contract has just been taken by Mr. Goodman, builder, of Bamsbury. for the sum of £19,988. The architects are Messrs. Searle, Son and Hayes, of 06, Ludgate-hill, E.C.”