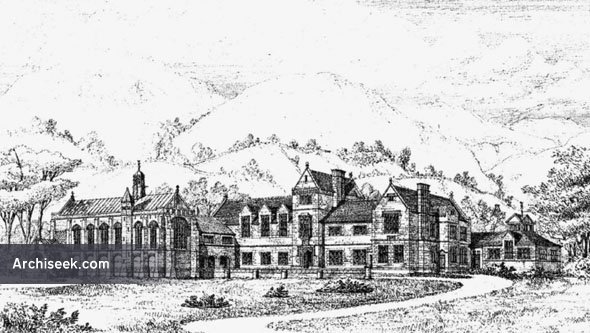 Published in The Building News, January 31st 1879. In the 1870s there was a tremendous amount of development and building work at Sedbergh, under the careful eye of the Headmaster, Frederick Heppenstall. This included the Headmaster’s House (now School House), classrooms, a chapel and four other boarding Houses.

“The ancient Grammar School of Sedbergh has, like many others in the country, lately come under the Endowed School Commissioners. A new “scheme” has been drawn up, and under the guidance of a large and influential board of governors new life is being infused into the old school. A head-master’s boarding-house for 40 boys was completed last autumn, and a second boarding-house for the same number of boys will be finished next autumn. The illustration gives a view of the proposed ” central block,” containing various class-rooms, physical science rooms and laboratory, drawing-room, governor’s and master’s rooms, large hall for assembly, chapel, Ac. and, when completed, will form a conspicuous group of buildings occupying a commanding site to the west of the town. At present only the group of classrooms are being built. The stone for the buildings is procured from quarries near Shap. The roofs are covered with green Westmoreland slates. Messrs. Paley and Austin. of Lancaster, are the architects.”

“This chapel is designed with a continuous nave and chancel without a chancel arch, which is eomewhat a feature of the churches of Craven. The long line of roof is broken by a bell-turret of oak covered with lead, and the roofs are covered with stone slates. The n.ave is 82ft. long and 20ft. wide. The arcades are low, with segmental arches, and fine square-headed windows in clerestory over ; narrow aisle passages give access to seats at sides. The tine organ is contained in the north transept and aisle, there being a similar transept on south side seated for masters’ families, Arc, with choir and clergy vestries on east side. Local stone, with Prudham stone dressings externally, has been used, the interior facing being of flecked red Runcorn ; pitch-pine roofs, and oak seats and fittings; wood block floors, flagged passages, and porches ; chancel floor tiled. The sole contractors are Messrs. Brassington Bros. The architects are Messrs. Austin and Paley, of Lancaster.”