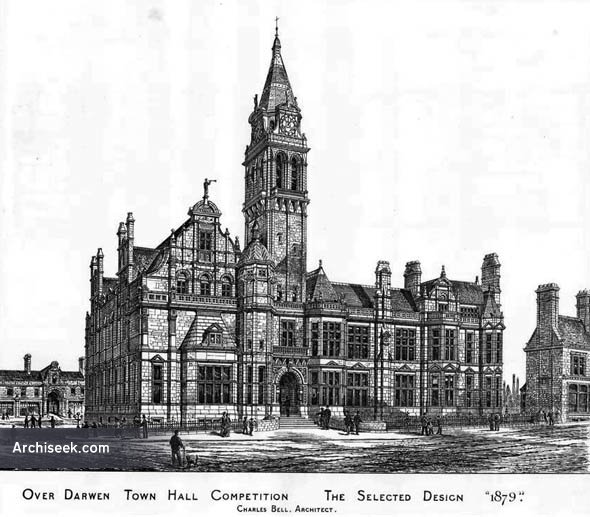 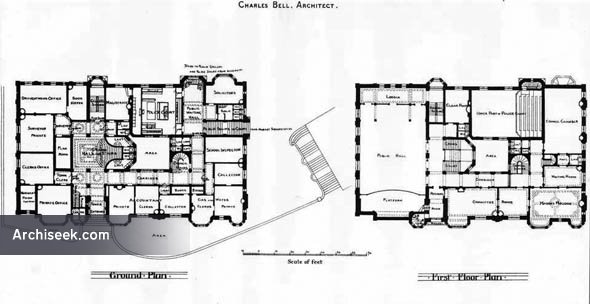 The selected design including ground & 1st floor plans as published in The Building News, October 24th 1879. At a meeting of the Local Board on 3rd June 1878 a proposal was made to acquire land to build a market hall and town hall. The plans of Charles Bell of London were selected. It was later decided to defer the building of a town hall indefinitely and provide accommodation in the new market hall for the town’s officials. Mr. Bell was officially appointed architect and Mr. Hobson Haigh from Manchester clerk of works.

Published in The Building News, October 24 1879: “The Town-hall will occupy a prominent site fronting Church-street, and open on all sides. There will be a basement story entered on a level with the Market-square behind and 4ft. above ground in the front. It will contain the fire-engines and offices, the market and sanitary inspectors’ offices, 6 police-cells, day-rooms and offices. In a mezzanine story there will be two sergeants’ and a superintendent’s house, with separate entrances, also stores, coals, and heating chamber. The ground floor has a main entrance in Church-street, another from the Market- square, one for the policecourt, and a fourth for the public on the east side. Each of the civic departments are separate and distinct and convenient for business. A central area gives light and air to the hall corridors. The principal floor is reached by a grand staircase in the eastern side leading to the public hall, which has also a gallery separate entrance from the square and another on the north side for private use. The hall will hold 1,000 people, and will be a noble room with a flat-pitched panelled roof in wood and plaster. The Mayor’s apartments, council-chamber, and committee-rooms are reached by a separate staircase, and are on the east and south fronts. The upper floor above these is arranged for a kitchen and hall-keeper’s rooms. The whole of the building will be of local stone with Longridge stone dressings.”