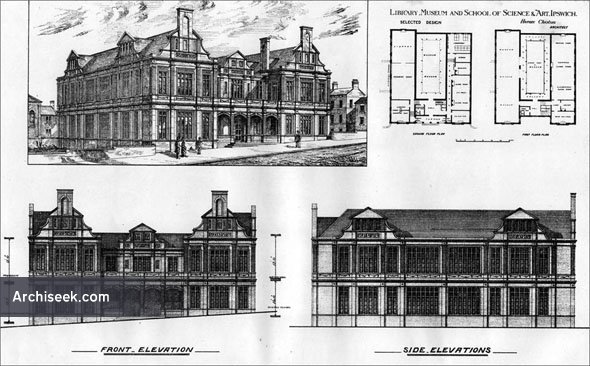 A replacement building for the town museum which is built in a 17th Century style, was the result of a design competition, won by Horace Cheston. Perspective View & Elevations including ground plan as published in The Building News, August 29th 1879. “he drawings illustrated are those approved by the committee. On further consideration of them, however, they have determined to alter slightly the front elevation by doing away with the chimney shafts over the side gables. The gables will therefore, be carried up plain, the plan being arranged so as to allow the chimney shafts to be carried up on the floors. The central museum will be lighted by a double skylight, and has a gallery running round it at the first- floor level, communicating with the museum over the reading-room and library. The school buildings have had the provisional approval of the Kensington authorities. The building is to be faced with red stocks. The dressings to be of a darker red brick, with moulded and cut and rubbed strings, architraves to windows, panels, &c., and cornices; Bath stone mullions and transoms being used in all the windows. The roofs to be covered with tiles. The rooms in all cases, except in curator’s and committee rooms, which will have the ordinary open grates, are to be heated by close stoves ; fresh air being provided to all the rooms by Tobin’s ventilators next the outside walls, and by shafts in the internal walls, communicating with air-passages under the building. The foul air will be carried of by tubes over the gas sunlights in ceilings. Mr. Horace Cheston is the architect.”