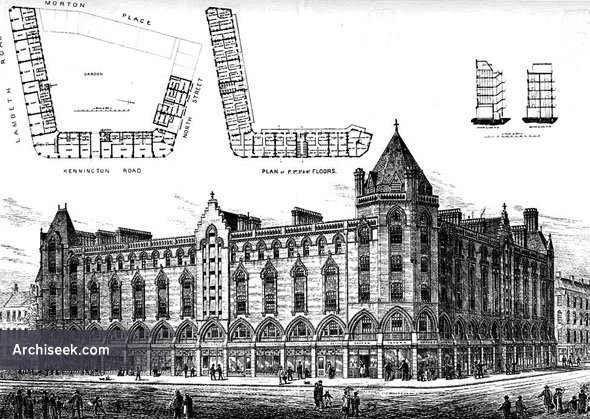 At a site at the junction of Kennington & Lambeth Roads, London.S.E., published in The Building News, December 26th. 1879. “The site of Surrey Lodge, at the intersectiou of the Kennington and Lambeth-roads, has been purchased by the South London Dwellings Company, Limited, who are about to erect upon it the industrial dwellings shown by the accompanying perspective. This Company has been formed to provide healthy dwellings for the working class, and though a dividend to the shareholders is not a primary object, the great demand in the neighbourhood for dwelling.’? of this kind will insure the pecuniary success of the undertaking. Shops will occupy the front- ages to the Kennington and Lambeth-roads, the comer shop being a coffee tavern, and above the shops there will be four floors of tenements arranged for letting in one, two, three, or four rooms each, according to the requirements of the tenants. Access to these tenements will be gained by stone balconies on each floor over- hanging the garden, which will form the centre of the quadrangle, from which stone staircases win lead to each floor, and to the flat roof with which the entire building will be covered. This flat will be formed of cement concrete on iron girders, and will serve as drying-ground, the laundries for the use of the tenants being built upon it at the angles. The buildings, which will be 49ft. high from pavement to roof, with angle towers 84ft. and 72ft. high, will be faced with red brick with moulded strings and arches, and the lower story with red glazed bricks. A tiled frieze will be formed over each shop to receive the name of the tenant. A constant supply of water direct from the mains has been arranged for, and the drainage has been planned on the most improved principles. Although the works have but recently been commenced, a number of applications for shops and dwellings have been already received. Mr. “William Smith , of Keimington, is the builder, and Mr. J. Willoughby the clerk of works. Mr. E Hoole, of 30, Russell-square, is the architect. ”