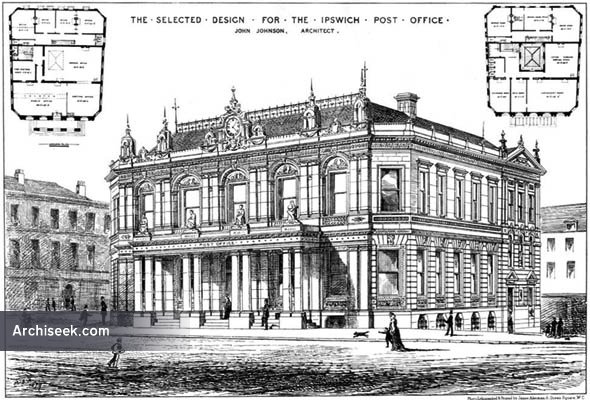 “To-DAY we give a view, with plans, of the chosen design for the New Post-Office at Ipswich. It was selected by Mr. Charles Barry, who, on the score that none of the designs submitted could be built for the stipulated sum of the competition conditions, chose that which seemed to him to be really the best and most suitable design from an architectural point of view, the plans having been provided to the competitors. The contest really was for elevations, as the plans had already been determined upon. Mr. John Johnson is the architect, and tenders are now being obtained for the execution of the work. We have before critically remarked upon this design, when reviewing the whole set sent in at the time of the competition. The front portion of the building is devoted to post-office purposes, the rear to general offices, a portion being already let for School Board offices. In-the’basement are the letter-carriers and the clerks’ kitchen, store-rooms, battery and linesman’s rooms, and the necessary coal- cellars and heating chamber. The warming apparatus will be fixed by the post-office authorities. The plans fully explain the arrangements of upper floors. The exterior will be executed in selected Ancaster stone, and it is hoped that the figures over the portico may be executed. Electricity, Steam, Commerce, Navigation, &c_., would afford symbolical subjects; statues to Sir Sir Rowland Hill and Professor Wheatstone would also be appropriate.” Published in The Building News, September 12 1879.