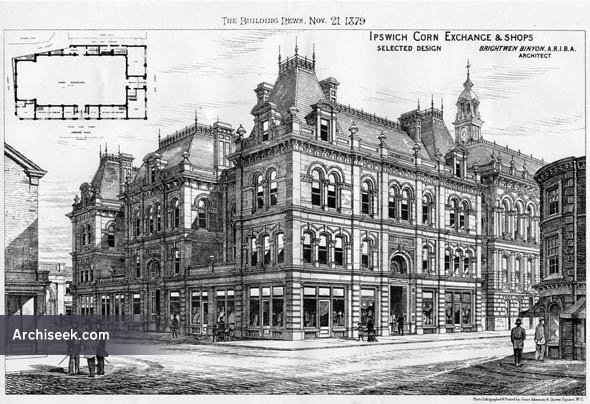 “We illustrate this week the design submitted in competition for the Ipswich New Corn Exchange by Mr.Brightwen Binyon, A.R.I. B. A., which was unanimously selected by the building committee and awarded the premium. We understand that since then the Town Council have instructed Mr. Binyon to prepare the plans for carrying out the work. The exchange is well situate in the centre of the town, back to back with the present town-hall, and is designed to harmonise therewith. The buildings consist of a large corn hall 131ft. by 60ft., with a belt of shops on two sides — towards King-street and Little King-street. The perspective view we publish is of the angle formed by these two streets. On the north side of the hall the irregular space will be utilised for retiring-rooms in connection “with the exchange, also a public urinal approached from the town-hall passage, the remainder of the space being devoted to a settling office for the use of the merchants, and to a yard of 150ft. super., which is the space required by the local Building Act for all dwelling-houses ; in this respect this plan differed from all the others, that a dwelling-house was given to the shop at north-east corner with the necessary yard. The shop is provided with a show- room and a sitting-room over the shop, and on the third floor a kitchen, and suite of sleeping- apartments in the roof. The shops on the south side are all to be small, those shown on plan being divided into two. On either side of the south entrance to the hall are offices which will be to let ; as also the suites of three offices on the first and second floors. There are also rooms over the shop at the southwest corner, which will be used in connection with the hall. On the second floor towards King-street are a fine suite of municipal offices approached from the town hall by a staircase at the north-east comer. An approach to the basement will be made from Lion-street, with cask and goods wharf, giving access to a central corridor from which large .store cellars open on either side. Those at the Lion-street end will be well lighted, and form excellent work.shops, the rest being only lighted by deck lights in the floor of corn exchange. The corn hall is mainly lighted from the roof, the whole north slope of the roof being glazed with double glazing, a space of one foot being left between the glass to deaded the sound of rain, so that the hall may be used for concerts and public meetings. There are also side windows which are more for ventilation than light. The winter ventilation is further secured by large fresh-air tubes in the window-sills, and a series of extraction flues in the centre panels of ceiling opening into a continuous louvred space along the ridge. The exterior towards King-street and the Little King-street side of angle pavilion are to be of Portland throughout, the rest of the exterio rbeing of Suffolk white bricks with Portland dressings, The interior of the hall, of which we hope shortly to give an illustration, is also to be of white brick, with a few terra-cotta red and buff bands. The drawings are now being prepared, and tenders will most probably be invited early in January.”