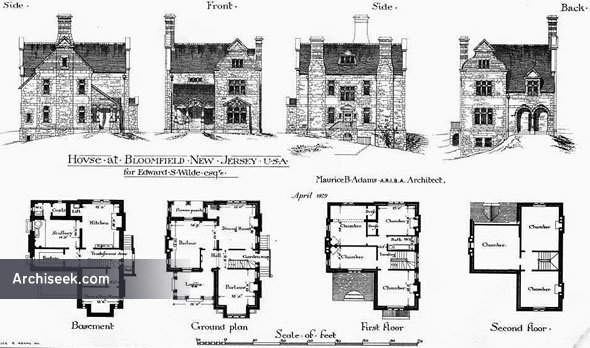 Front, Rear & Side Elevations including basement, ground 1st & 2nd floor plan, as published in The Building News, August 15th 1879. “This house is one of a series to be erected at Bloomfield, New Jersey, U.S.A,, and is now in course of building from the drawings and details sent from London. Since the plans, which we publish to-day, were made, some improvements have been effected in the original arrangements which were prepared to meet the suggestions of the proprietor, Mr. Edward S. Wilde, of New Jersey. Externally the elevations are the same, the chief departures from the first plan being an improved treatment of the first parlour, and rearrangement of the bathroom, etc., on the chamber floor. A basement in all houses in America is an advantage, as it is almost a necessity on account of the severe frosts, which would upheave many of our more lightly-constructed houses in this country. Mr. Wilde is intending to introduce several ideas into his houses which he acquired when visiting England this year. The walls are of local stone up to the eaves, above which red brick is introduced to give colour. The roofs arc covered with slates and red ridge tiles. Quiny glazing is introduced into the upper lights of the windows, those which are made to open being metal casements. The staircase window is to be filled with stained glass. Mr. Maurice B. Adams, A.R.I.B.A., is the architect.”