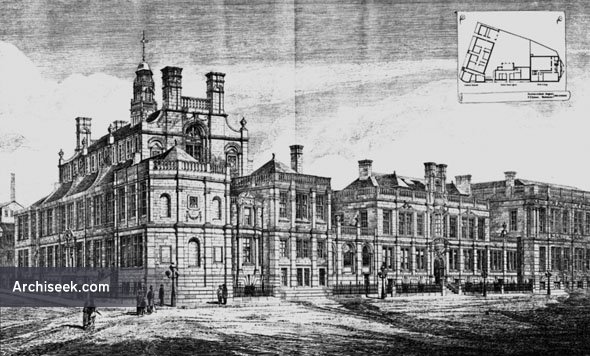 Perspective view and ground plan published in The Building News, October 17th 1879. “But the principal schools, indeed, we may say the chief work now going on in Sheffield, are” the Central Board Schools, the School Board offices and the Firth College, three distinct buildings merging the one into the other at the bottom”of AV est-street. But it is very doubtful whether this group, seen from any point of view, externally, or from the inside, can be deemed successful.”

“The Firth College, Sheffield, which we illustrate this week, is to be opened on Monday next by Prince Leopold. Internally, the building’ contains on the principal floor a hall for lectures on literature and other popular subjects, measuring 80ft. by 40ft., extending through two stories, surrounded on three sides by galleries, and lighted from the ceiling. Also a large room, especially adapted for lectures on physics or chemistry, which, being fitted in the most approved lectureroom fashion, extends downwards to the basement, and is provided with revolving shutters so as to obtain darkness during experiments, etc. On the first floor the portion not occupied by the upper part of the hall is devoted to lecture -rooms and class-rooms. In the basement are the necessary offices, the heating apparatus, kitchen, &c. In the entrance hall, and opposite the outer door, stands the bust of Mr. Firth, from the chisel of Mr. Bruce Joy, which forms a portion of a testimonial presented to the donor of the College, Mr. Mark Firth, .and was exhibited at the Royal Academy during the present year. This hall is fitted with swing doors, and has a groined ceiling. Externally, it forms one of a large group, consisting of the College, the School Board offices, and the great Central School, all designed by the same architects, Mr. T. J. Flockton, of Sheffield, and Mr. E. E. Robson, F.S.A., of Parliaament-street, London. The key-note of the style is said to have been given by Clare College, Cam- bridge, but the whole is treated with great freedom, and without any subservient imitation of the prototype. It has been found exceedingly diffi- cult to group three such wholly different buildings into one harmonious whole, and a close observer will notice that the detail of the Firth College is slightly enlarged throughout, in consequence of the greater height of its stories, over that followed on the other buildings. The foliage sculpture has been executed by Mr. J. McCulloch, of London, while the tympana over the arched door- way forming the principal entrance to the College, and respectively representing “Science” and “Art,” are from the chisel of Mr. Onslow Ford, of Blackheath.”