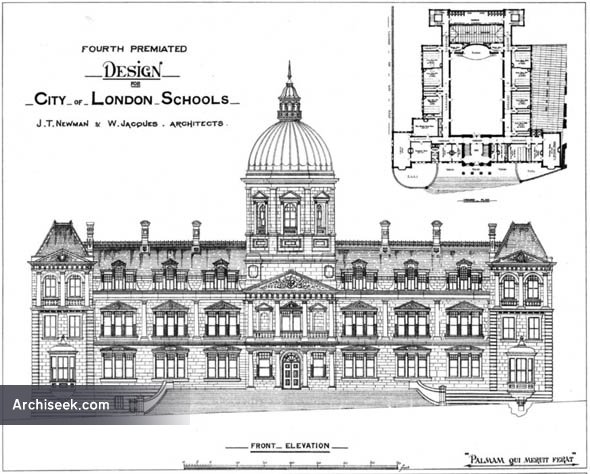 Published finalist in design competition to design a new building for the City of London School.

“The design for the City of London Schools under the motto “Palmam qui meruit ferat” is planned with the Assembly Hall in the centre of the building, its axis being north and south. The whole of the administrative department is arranged on the front of the site, extending from the existing hotel to the proposed new side-road, and the class-rooms, lecture-theatre, &c., arranged on the east and west side of the hall, from which they are separated by a corridor 7ft. 6in. wide. The accommodation provided is as follows : Secretary’s offices adjoining the entrance, provided with the requisite lavatory, w.c., safe, &c. A committee-room 29ft. by 21ft. adjoining, and near the entrance. A library 37ft. 9in. by I9ft., at the south-west angle of the angle, and forming a convenient waiting-room for visitors either to the head-master or to the committee. A head master’s-room 28ft. by 19ft., provided with w.c. and lavatory. The whole of these rooms are the suite, and all have a liver frontage. The common-room for the assistant master, 36ft. by 19ft., is placed at the south-east angle of the building, communicating with an ante-room, and provided with w.c.’s and lavatory. A porter’s room .situate on the right side of the entrance-hall, with a store for books in rear. The dining-hall is placed on the first floor, with accommodation for 200 boys. The kitchen, scullery, larder, four living-rooms, and offices for porter’s family and kitchen staff are on the second floor, immediately over the dining-hall. A furnace-room, and coal and other stores, are provided in the basement. Twenty class-rooms are provided (8 on ground- floor, 12 on first floor), each to accommodate 40 boys, and ten of the class-rooms are provided with sliding partitions, impervious to sound ; the whole 20 class-rooms are lighted from the side, 15 of them having a left-side light, and, in addition, the 4 class-rooms on first floor of east wing have top lights to admit of their occasional use as drawing class-room. The minimum pro- vision of lighting is about 300 square inches of window-surface for each pupil. The dimensions of the class-rooms are so devised that they will admit of either dual or long desks being used.

Each class-room is provided with a chamber for hats and coats, fitted with special arrangements for airing and drying the clothes, and, to secure greater quiet and privacy, each class-room is entered from a lobby communicating with the hat chamber and general corridors. The assembly hall is 92ft. by 6Oft., arranged to seat 1,007 persons, in addition to 160 seats in a shallow south gallery, and has the main corridors running round three sides, with which it communicates by ten doors. It is provided with a plat- form suitable for prize distribution, &c., and with retiring-rooms in the rear. The lighting of the hall is arranged near the ceiling. A practical chemistry laboratory, 46ft. by 19ft., an extra class-room, 3Sft. by 19ft. ; a lecture- theatre, 70ft. by 30ft., to seat 400 boys; a private room for the lecturer, adjoining the lecture-theatre, and a best apparatus-room are provided on the second floor, on the west side of the hall. The principal entrance is in the centre of the Thames Embankment frontage into a hall 29ft. square, from which every part of the building is directly accessible, either by corridors or stairs. The corridors are continued on each floor by covered ways to the w.c.’s, lavatories, &c., placed in a distinct block, 30ft. in rear of main buildings, and separated there- from by an open area. The general warming of the building was proposed to be effected by the circulation of hot water, and the special warming of the class-rooms by open-fire ventilatiag-stoves. The lobbies and corridors are lighted over the low screen at front of the hat and coat lobbies, and these lights, occurring at short intervals, are supplemented by numerous windows. With a view of economising both space and cost, covered playgrounds have been ar- ranged underneath a portion of the building.

The total covered playground amounts to over a quarter of an acre, and the total covered and uncovered playground is more than an acre in ex- tent. It was proposed to construct the foundation, interior, and the back and east elevations of gault bricks, the front and west elevations, the principal staircase and the dressing to windows being in stone ; the floors of corridors and lavatories and the back stairs to be fireproof, the roofs to have iron principals and purlins with best yellow fir rafters, and to be boarded, felted, and covered with Welsh slates ; the dome to be covered with stamped copper sheets. T