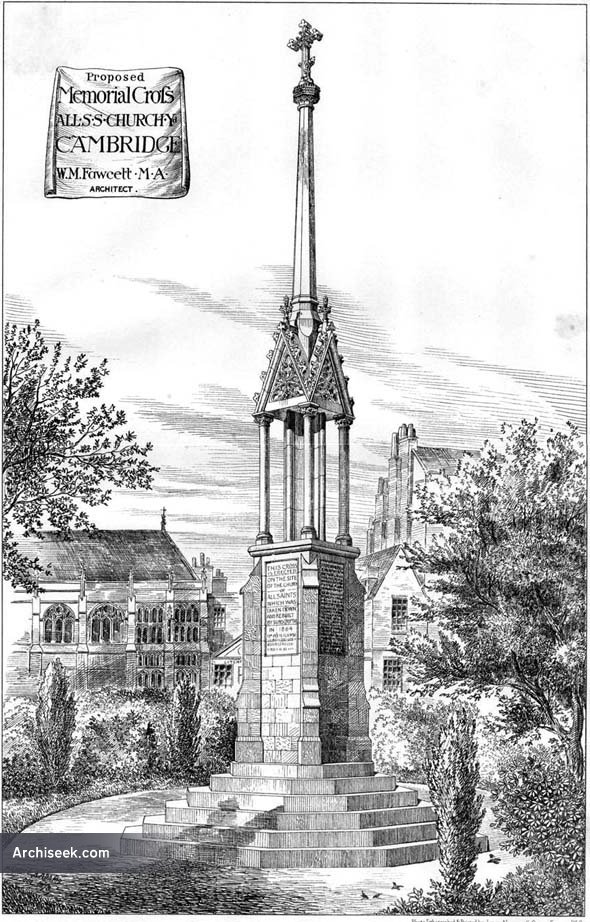 Published in The Building News, September 6th 1878. “The cross, an illustration of which appears in our present number, is one which it is proposed to erect in the old churchyard of All Saints, Cambridge. The old church was an unsightly building, with a brick chancel of the early part of the last century, and was taken down in 1805, a new church having previously been built on a site given by the Master and Fellows of Jesus College, from designs by G.P. Bodley. Since the demolition of the old church, time has done much to obliterate the names on the tombstones — in most cases the inscriptions are most illegible — and it has been felt that the time has come for the erection of a monument, at once to mark the site of the old church, and to record the names of some of the more noteworthy of those who rest within the sacred enclosure. The site on which the cross is to be erected , is one of considerable dignity. Its shape is I pretty nearly triangular. On the south side i are Trinity and St. John’s Colleges, on the ‘ other two sides the new divinity schools now ! in course of erection, and the new buildings of Trinity College. Our view is taken from the south side, at a point about midway between the gateway of Trinity and the east end of the chapel. The divinity schools are seen behind the cross, on the spectator’s left band.”