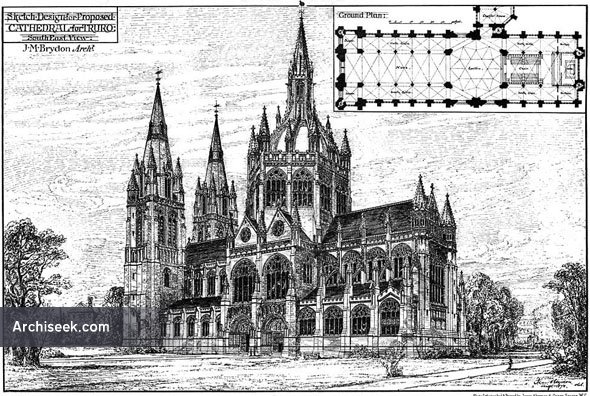 The see of Truro was established in 1876 and the first Bishop consecrated in 1877: this was the first cathedral to be built on a new site in England since Salisbury Cathedral in 1220. Construction began in 1880 to a design by the architect John Loughborough Pearson, after an architectural competition.

Description of Brydon’s design from The Building News: “Our illustration gives a view of the sketch design, which, along with drawings of other work, was submitted to the cathedral committee by Mr. J.M. Brydon, of 08, Gower-street, W.C. The site being somewhat limited— 240ft. long by a width of only 72ft. — seemed to require some special arrangement to secure the requisite area in the plan. The idea of a central lantern (after the manner of Ely) was adopted. The advantages of such a treatment for a confined site are very great, when the congregational requirements of a modern cathedral are taken into account, as compared with one designed for the elaborate ritual of the middle ages. To save area space the vestries were also included within the building, and the chapter-house is placed on the north side, on ground the committee hope to be able to acquire at a future date. The general dimensions are : — Nave, 100ft. by 28ft.; choir 70ft. by 28tt. ; central lantern, 50ft. diameter (exclusive of the shallow double transepts) ; the general height of the vaulting, 60ft.; the west towers about 200ft. : and the central hexagon, 250ft. The design was for an entirely new building, irrespective of the old church now on the site, and is founded on late 14th-century English Gothic.”