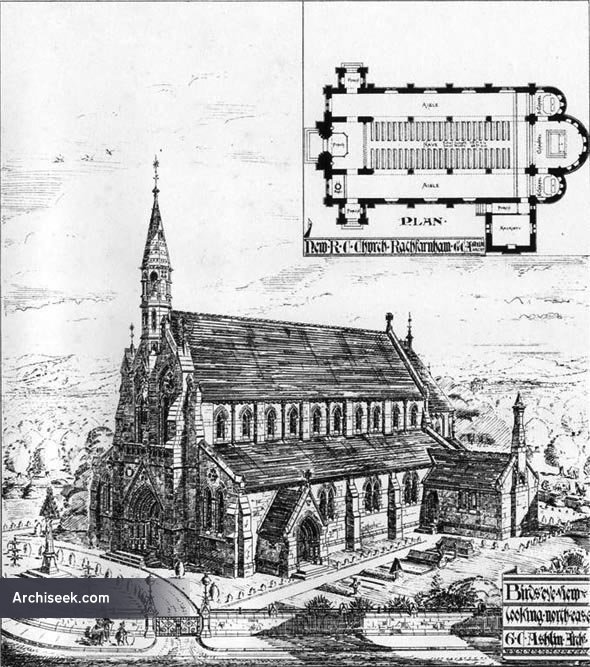 Designed in Early French Gothic style with the nave, aisles and chancel terminating in 3 semicircular apses.The foundation stone was laind on 29 March 1875, and the church dedicated 27 March 1878 by Monsignor McCabe.

Described in The Building News: “This building, which was opened a few months ago, is situated some miles from Dublin, and forms the parish church of a large country district. It is built of granite, with Portland stone dressings. The bell turret on the west gable is octagonal on plan, and rises to the height of 98ft. The principal internal dimensions are — nave, 92ft. by 21ft. 6in. ; aisles, 90ft. by 10ft. 6in. ; chancel, 25ft. by 21ft. 6in. The ceilings, except in the chancel, are boarded with pitch-pine. The nave ceiling is waggon-headed and panelled ; the panels being enriched with stencilled decoration in two tints of stain colour. Red polished granite has been used for the columns of nave arcade, and for the detached shafts of chancel arch and nave responds. The nave caps are of Portland stone, moulded, those of responds having foliage carving and angles bearing emblems. The chancel is divided into five compartments externally by projecting piers springing from a weathering under the windows, and dying into the corbelled cornice, and internally by triple engaged shafts supporting the arched ribs of roof. It is lighted by coupled lancets in each compartment. The entire cost, including the altars and furniture, has been about 8,000. Messrs. Meade, of Dublin, were the contractors, and Mr. George E. Ashlin was the architect.”