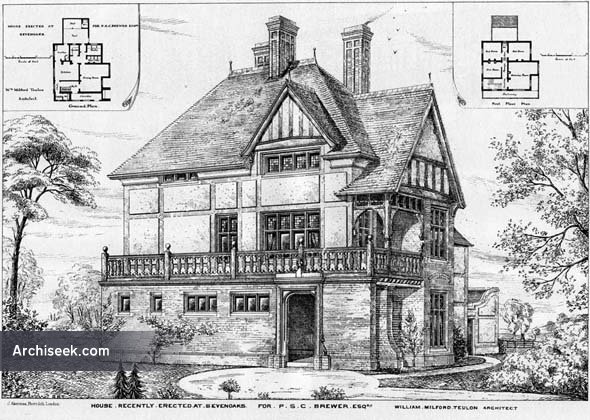 Designed and erected for P.S.C. Brewer esq., and published in The Building News, September 27th 1878. “This house has been erected on a site within about an acre of land, being a portion of property belonging to P. S. C. Brewer, Esq., in Bradbourne Park, in a pleasant outskirt of Sevenoaks which is being gradually worked out in plots for building moderate-sized houses, with various areas of garden and pleasure grounds. The two plana will explain the arrangement of ground and first floors ; and there are three bedrooms on the second floor, making six in all. It need only be remarked that the drawing-room, with verandah and balcony, being placed on the first floor, was determined partly by the desire to provide all the offices on the ground floor without extending the building, but chiefly to obtain a fine view, which is not so well seen from below. The perspective sketch is taken from the north- west. The corridor, the western front up to the base of the gable, and the chimney-stacks are built of red bricks and Box Ground stone dressings, and the balcony and verandah of wood. The superstructure is built with 1-lin. brick walls, finished with rough stucco in raised panels, which is of the lightest possible tint of greenish grey, while the plaster spaces between the timbers of gables are the purest white.

The adoption of this treatment was the result of the design having been originally made to be worked out as a concrete house, which was abandoned through the difficulties and delays which were found to stand in the way of that mode of building — the external effect of which, however, it was desired to retain as being very satisfactory and pleasing in its general appearance and harmony of colour. The roofs are covered with red tiles. The work has been executed by Mr. J. G. Naylar, buOder, of Bochester, from the design and directions of Mr. Wm. Milford Teulon, architect, of 18, Upper Woburn-pkce, W.C.”