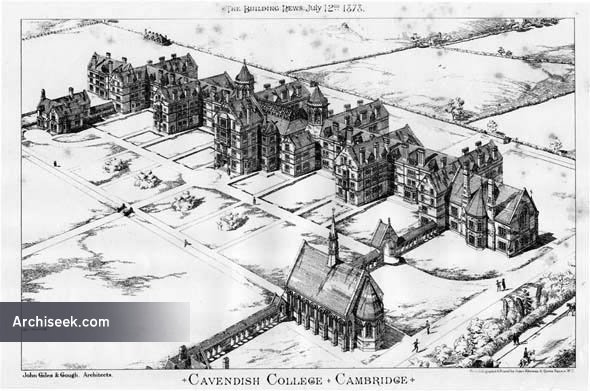 From The Building News, July 12 1878: “We illustrate this week Cavendish College, Cambridge, a new wing of which was opened on May 22nd by Dean Stanley. The part erected and opened some two years ago by the Duke of Devonshire (who gave his name to it), was sufficient to accommodate about 70 students, and the necessity soon arose for an enlargement. When complete the college will accommodate 300 students besides tutors, and residences for warden and sub-warden. Economy has been studied throughout, both in the architecture of the building itself and its general arrangements. The plan is that of a number of single rooms to be used as bedrooms and for private study, in addition to the large rooms in common, libraries, dining hall, &c. Cavendish College is intended, to some extent, to solve the vexed question of university extension — 1st, by enabling students somewhat younger than ordinary undergraduates to pass through a University course and obtain a degree. 2nd, to train in the art of teaching those students who intend to become schoolmasters. 3rd, to offer to parents and students the advantage of a wise economy. The cost to each student is under lOO per annum, which gives three terms of residence, in each of the three years, during which the student must remain to obtain his degree. The cost of the buildings already erected, and occupied by a number of students, is about 13,000. The number capable of being accommodated is one hundred, beside wardens’ and tutors’ apartments, kitchen offices, &c. The architects are Messrs. John Giles and Gough, of Craven-street, Charing-cross, and the builder Mr. Sharman, of Bishopgate-street, London. The drawing from which our illustration was taken is now on view at the Royal Academy. “