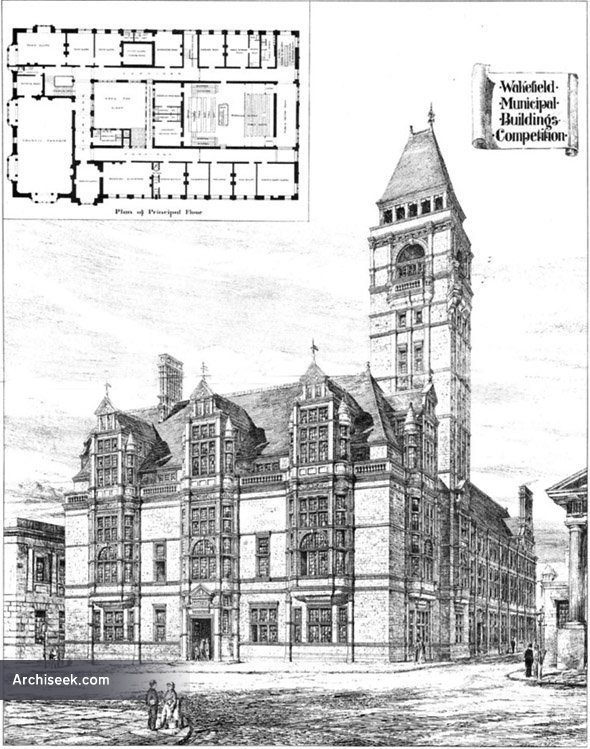 A new movement for building a Town Hall in Wakefield began in 1874 and in 1876/77 the Corporation promoted a Bill for purchasing the waterworks, for building a Town Hall and for other purposes, which became an Act in August 1877. Before the Act was passed, work had begun: advertisements for competitive design, based on space requirements fixed by the Town Clerk, the Borough Engineer and the Town Hall Committee, were issued through the technical press and the first prize was won by T.E. Collcutt, architect of Bloomsbury Square, London, who received a prize of £150.

The final choice among the various and supposedly anonymous designs was made by George Edmund Street of London the famous Victorian architect, who visited Wakefield for the purpose, and in whose office Collcutt had once worked. Collcutt’s designs were followed almost entirely; William Holdsworth of Bradford, builder, was the successful tenderer for the erection of the building, the tender price for a building of Spinkwell stone being £43,700, while the architect’s fees amounted to £3,450.18s. 8d. The winning design was published in The Building Newsm May 25th 1877.

The foundation stone was laid by the Mayor Alderman W.H. Gill, solicitor in October 1877, with considerable ceremony, the building was opened in October 1880 by the then Mayor W.H. Lee. The streets on each side of the new building were named after the two Mayors who respectively laid the foundation stone and opened the building. In 1877 it had been suggested that the new Town Hall would enable Wakefield to “˜vie’ with the Town Halls of Leeds and Bradford.