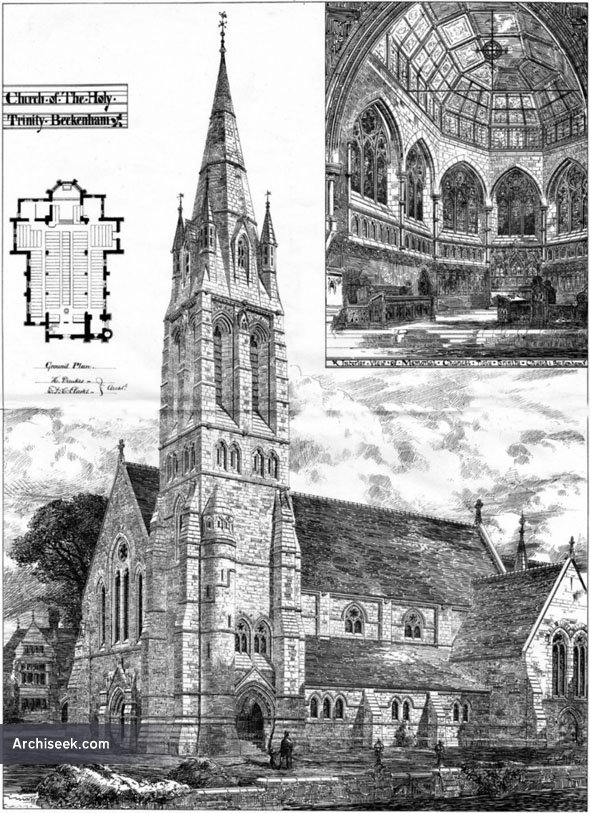 Holy Trinity was built at the expense of Francis Peek (b1834-d1899), a very successful tea merchant who lived in Sydenham. He endowed many churches in South London in response to the Bishop of Rochester’s Ten Churches appeal and dedicated Holy Trinity in memory of his parents William and Mary Peek.

Holy Trinity was consecrated on 22nd June 1878 by the Bishop of Dover, Dr Edward Parry. The tower and steeple were added in 1883. The architects were Daukes and Clarke of Sergeants Inn, London EC4 and the builder was William Tongue of Plumstead.

The church was severely damaged by two near misses during the 1939-45 war and restored over a number of years. In 1980/81 this large Victorian church, built to seat over 900 people was completely re-ordered due to a severe decline in congregation. The building was gutted by an arson attack during the early hours of 11th September 1993, after which architect, Gordon MacLaren, was invited to redesign the interior of Holy Trinity. He was asked to incorporate an area specifically for children, an office, anattractive lounge for the elderly and an internal Sacred Garden, open to the skies.