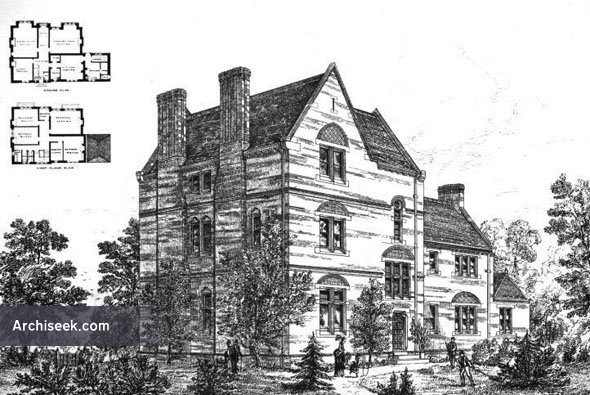 From The Architect, March 6, 1875: This villa has been built on Mr. W.R. Perry’s property at Crouch Hill, Hornsey, on a site overlooking (beyond the village of Hornsey to the north) the Alexandra Palace, the views in this direction being the best. The generally-received aspect for the dining and drawing-room was in this case modified, and these rooms face the north.

The arrangement of the ground and first-floors are explained in the accompanying plans. On the second-floor are two large nurseries, a nursery, china, and linen closet, and two other bedrooms. The walls are faced with Ballingdon red bricks, the roof covered with plain tiles, and ridge tiles, from Mr. Cooper, of Maidenhead. The perspective shows the garden front.

The work was carried out by Messrs. Carter & Sons and Messrs Roberts, the contract being for 1,840/. Mr. Alfred W.N. Burder, of 14 York Chambers, Adelphi, was the architect.