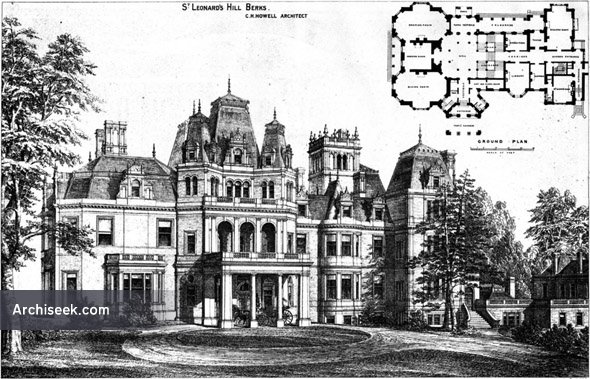 Perspecive view of main front published in The Building News, October 15th 1875. Largely demolished in 1924, with the remainder razed in 1970. The previous house known as Gloucester Lodge, was sold by Earls of Harcourt, in 1872 to Frances Tress Barry who renamed the house St Leonard’s Hill. He set about rebuilding it into it’s final form successfully creating an elegant French chateau-style house. The main two-storey body of the house had three-storey towers on each corner – each tower having steeply pitched roofs with ornate dormer windows. The house had a largely rectangular footprint, slightly longer on the side leading out to the garden terraces. On that same side was also attached an extension with a similar roof. The house was sold in 1924 following the death of its owner Lady Barry The new owner immediately set about striping and demolishing the house, selling off anything possible. The remainder stood until 1970 when it was demolished.

Description from ‘Beautiful Britain – the Scenery and Splendours of the United Kingdom’ published in 1894 by the Werner Company of Chicago: “St. Leonards Hill, is situated in the parish of Clewer, Windsor Forest. It was formerly called Gloucester Lodge, it having become the property of the Duke of Gloucester when he married the original proprietress, the Countess of Waldegrave. At that time the building was enlarged and much improved, and, together with seventy-five acres of land principally laid out in pleasure-grounds and lawns, is said to have been valued at £10,000. In the beginning of the present century it was the property of General Harcourt, and now belongs to Mr. Barry. St. Leonards Hill is a name no doubt originating from the chapel of Saint Leonard of Loffeld in Windsor Forest, in connection with which there is still extant a document dating from the time of Edward III in which a large portion of the forest was granted to John the Hermit.

There are many beautiful features of Renaissance architecture in the building, which is finely situated and commands a splendid view. The ground belonging to it would seem at one time to have been a Roman encampment; for, particularly in the early part of the eighteenth century, numerous antiquities have been brought to light in course of building and other operations. Amongst these was a quaint old brazen lamp, unearthed from beneath a stone under which it had evidently been hidden, which was afterwards presented by Sir Henry Sloane to the Society of Antiquaries, and has since been chosen by them for their crest. Numerous coins also, dating from the times of the Emperor Vespasian and the Lower Empire, have been dug up from time to time on St. Leonards Hill, and purchased by the same society. Spear-heads, arrows, pieces of trumpets, various coins and weapons, pots and fragments of ancient earthenware, and other souvenirs, have since been found.”