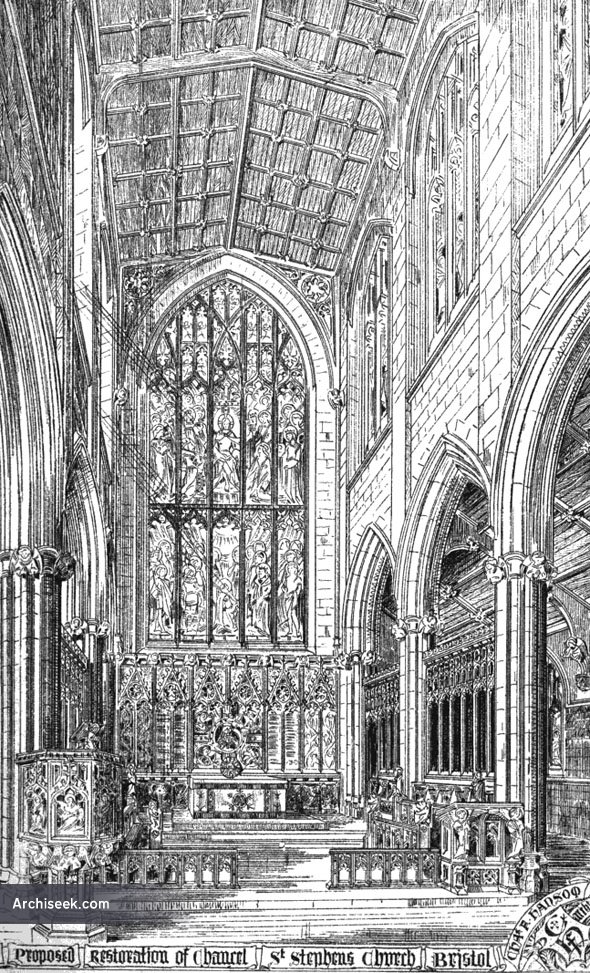 From The Architect. July 3, 1875: publish to-day an interior view of the chancel of this church, which is about to be restored, from designs by Mr. C. F. Hansom, architect, of Clifton.

The work has been undertaken by the ancient society of “St. Stephen’s Ringers” (see note), whose charter dates from the time of Queen Elizabeth. This society having become alive to a sense of the responsibility of their honourable calling, have revived the religious part of their duty by attending in a body the special service in their parish church, and have determined to show their zeal and devotion for the glorious old church of St. Stephen’s, to which their charter binds them, by commencing the much-needed work of restoring the interior of the chancel, hoping thereby to induce others to complete the good work they have begun by a thorough restoration of the whole of the interior of the sacred edifice. They therefore sought the assistance of Mr. C. F. Hansom, architect, who has accordingly prepared drawings for the complete restoration of the whole of the interior, which it is proposed to carry out by degrees, as the funds at their disposal will permit, commencing””1, with the east window, reredos, &c., shown in our view, and to continue the work in the following order:””

2. To re-arrange the floor of chancel, and pave with encaustic tiles; 3. To put in oak screens or parcloses in the four side arches; 4. To provide oak stalls and seats for choristers, reading-desk, &c.. from ancient models; 5. To erect a new pulpit of stone or oak; 6. To remove the present incongruous pews, and replace them by low open seats of oak, and pave the alleys or gangways with plain tiles enriched with encaustic tile borders; 7. To restore the ancient baptistery and font, and enclose with oak screens.

Liberal contributions have already been obtained from several members of the society and their friends, and there is little doubt that as the work proceeds] funds will be forthcoming to meet the expenses.

The .restoration, if carried out according to the designs of the architect, will make the splendid old church of St. Stephen’s, internally, as it is now externally, one of the finest ornaments of the city of Bristol.

The church of St. Stephen dates from 1304, and was built by the abbots of Glastonbury, and remained their property till the Dissolution. It was rebuilt at their expense during the latter half of the fifteenth century. The splendid tower, the pride of ancient Bristowe, was erected by John Shipwald, one of the merchant princes of Bristol, who was mayor of the city in 1455; it is about 170 feet high, and is generally allowed to be one of the handsomest parish church towers in England.

Taylor, in his history of St. Stephen’s, says:””” The interior of the building is blocked up by odious pews, and defaced by an incongruous Corinthian altar-piece, all of which are detrimental to its proper character, and have no doubt nearly reached their day of doom. . . .” ” What was formerly ‘ the great east window ‘ has been blocked up to the height of the transom to afford accommodation for the Grecian altar-piece.”