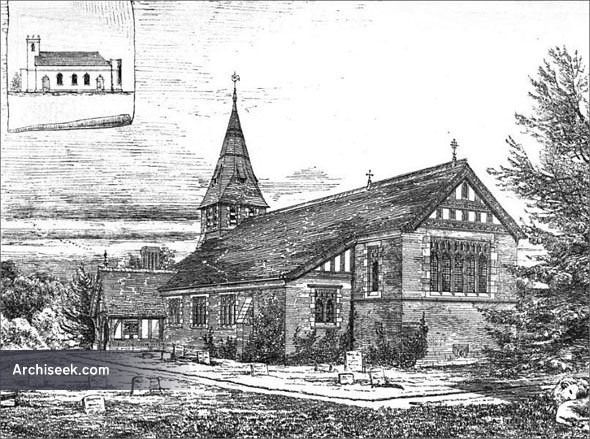 From The Architect, December 4, 1875: This church, built in the style shown by the small sketch about JL the year 1730, on the site of a more ancient structure (traces of which still remain), has been recently remodelled. The bricks, which are 2J inches thick, being specially well made, and the interior arcades of massive English oak pillars, saved the building from being entirely pulled down. The chancel, vestry and porch are entirely new; new stone windows have been inserted; the roof has been covered with Broseley tiles; buttresses have been built to the tower, and a spire covered with oak shingles has been constructed. The works have been carried out by subscription, strongly aided by Lord Delamebe, of Vale Royal. Mr. John Douglas was architect, and the builder Mr. Richard Beckett, of Hartford.