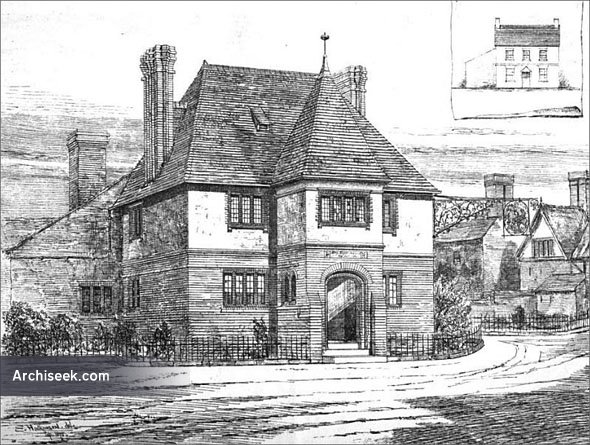 From The Architect, December 4, 1875: This is an alteration from a house as shown in small sketch. I Moulded bricks have been used throughout, and brindled tiles for roofs. The sign is cut out of sheet copper and painted; it is supported by an iron bracket brought from Nuremburg, where it formerly served a similar purpose.

Inside the porch is the following inscription:””
As Saint George, in arm’d array,
Doth the fiery Dragon shiy,
So m&y’st thou with might no less
Slay that Dragon Drunkenness.

This village contains many interesting examples of ancient and modern work. There are also other houses similar to one shown in small sketch, which are, however, gradually succumbing to the good taste of the proprietor. The works have been carried out from the designs of Mr. John Douglas, by the estate workmen, under the direction of Mr. Joss Lewis, of Arley.