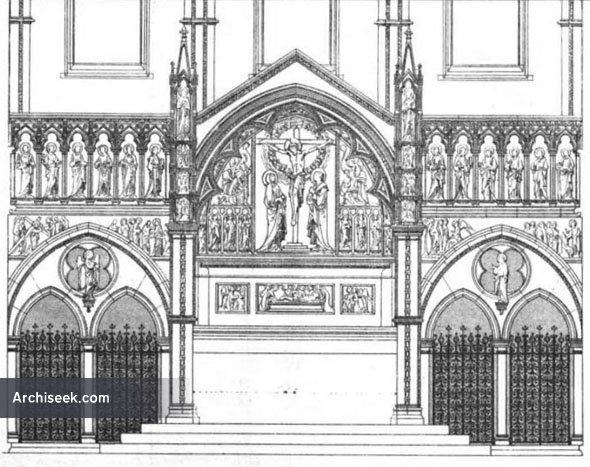 According to Pevsner, one of the finest churches of its period in England. The 254ft tall spire was constructed in 1898, and is a local landmark. However the network of streets and urban fabric that surrounded it is now largely lost, leaving the church marooned by a network of new streets and housing.

From The Architect, October 30, 1875: The reredos is executed entirely in Caen stone, including the JL sculpture. The centre feature of it projects some little distance before the wall at the east end of the chancel, and although it does not overhang the altar, yet it has the effect of a canopy over it. The centre subject is the Crucifixion, with on either side angels censing; below are figures of angels in adoration, as there are also in the arch in the soffit, those at the top holding a crown of glory over our Lord. In the pinnacles are figures of the Four Evangelists, and below them in the small panels there are twelve subjects, six of them being types, and the other six emblems of our Lord’s Passion. Underneath the principal subject, and just above the altar, is introduced the Entombment, and on either side angels in adoration. Right and left of the centre feature are twelve niches filled with figures of the Apostles, including St. Paul. Below these and over the arches are four subjects””first to the left, Bearing the Crost, second, Disrobing our Lord, third, Our Lord Meeting the Three Marys, and the fourth the Incredulity of St. Thomas. Below these again, and standing on corbels in the arches, are figures of the angel and St. Mary, representing the Annunciation. The whole has been executed by Mr. Nicholls, of Hercules Buildings, Lambeth, from the designs of Mr. John L. Pearson.