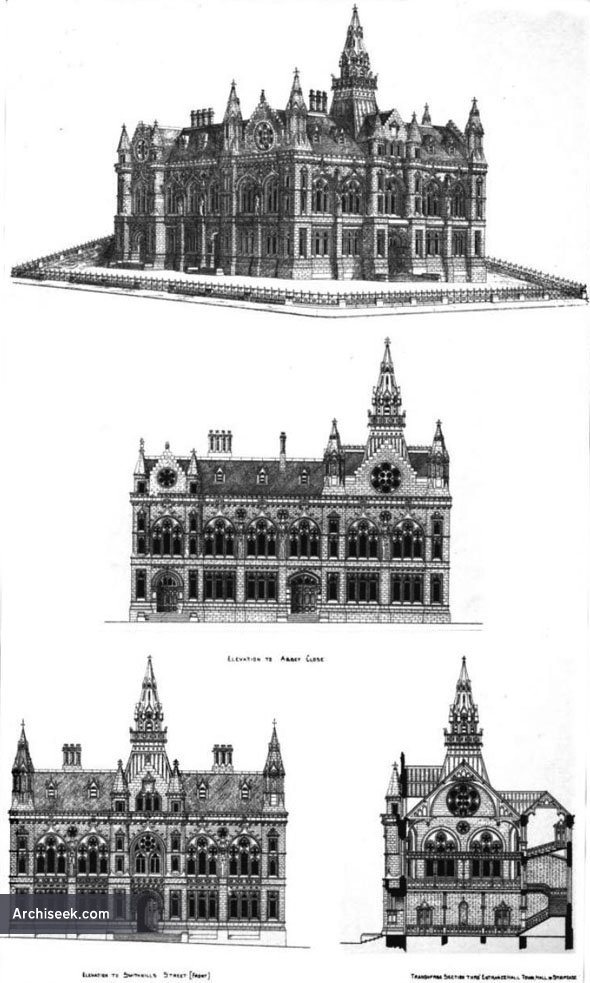 We have already published the accepted design for the Paisley Town Hall. \Ve now give the design to which the second premium was awarded, and which is by Mr. John Robertson, of Inverness. According to plan A, the principal entrance to the Town Hall would be from Smithhills Street, the entrance hall, 52 feet 6 inches by 27 feet, being approached by a flight of stone steps 27 feet wide, so as to raise the ground-floor about 3 feet above the street level.

The main stair, 9 feet wide, is placed at inner end of entrance hall, and approached through three deeply-moulded and enriched stone arches, supported on red granite columns, and having flights of stone steps branching to the right and left.

There is a second staircase hall, 37 feet by 17 feet, entering from the Abbey Close, having stone stair 7 feet wide. Two committee rooms””one 47 feet by 26 feet, and the other 23 feet by 21 feet, with cloak room 17tfeet~by 16 feet””are arranged on left side of entrance hall, and on the right is placed the smoking room, 62 feet 6 inches by 47 feet, but having no communication with it. The smoking room faces Smithhills Street and the River Cart, and has two entrances from the west side with lobbies to each, and in connection therewith are water-closets and lavatories. The cooking kitchen, fitted up with all modern improvements, with offices and cellars, are placed next Abbey Close, having access either^from the west side or from Abbey Close, as may be desired. At the back of kitchen are placed the keeper’s rooms, with separate entrance.

The Town Hall, 100 feet by 62 feet 6 inches, is placed on first floor, the front facing Smithhills Street, and will accommodate 1,500 persons, with orchestra at west end, 37 feet by 19 feet, having ladies’ and gentlemen’s waiting rooms off same, with lavatories and water-closets to each. The Hall has two entrances to main staircase, one to stair from Abbey Close, and one to passage leading to waiting rooms, thus giving abundance of access to and out from the Hall. In connection with the Hall on first floor is a cloak room, 17 feet by 13 feet, with water-closet and lavatories.

A side gallery, to accommodate 350, is placed over main staircase and waiting rooms, and having a full command of the Hall, and looking into same through enriched arched openings, the arches being supported on granite columns, having carved capitals. The access to this gallery is by a 6 feet 10 inches wide stone stair; also a turret stair 6 feet wide. A gallery, to accommodate 150, is placed at east end of Hall, supported on ornamental iron columns with arched and panelled front, access being given by a 7 feet stair.

The smaller hall, 57 feet by 30 feet, is placed over kitchen with two entrances, having stairs 7 feet wide, nnd having cloak room, water-closets, and lavatories attached ; on one side of hall nre arched recesses for library. The hall, if desired, can be used as a dining room, having communication with cooking kitchen, a stair and lift being arranged in connection with same. A large water cistern is placed in roof over orchestra to be used in the event of fire.

Plan B is an alternate arrangement, showing the smaller hall on ground-floor, and which may be used as a dining room, and the smoking room on first-floor over kitchen, and which would be preferable to having it on ground-floor, as it will be open up to the roof, thereby giving better ventilation. The entrance halls and smoking rooms are intended to be laid with encaustic tiles. The roof of halls, also all the interior finishings, are proposed to be of pitch-pine, varnished.

In the elevations, the lower apartments are lighted by transomed triplet windows, having arched heads, and the upper halls by a series of triplet traceried windows, deeply moulded, with crocketed labels over. The walls are supported by buttresses, having canopies over, and prepared for receiving statues. As special instructions were given to the effect that no clock tower was contemplated, an ornamental Jlfche has been substituted over principal entrance, and which will serve both as a bell and view tower. This./7ecAe is proposed to be of oak, and covered with lead.

The whole of the outside walls were intended to be of white dressed freestone, and the side to be enclosed by a dressed enclosure wall, with ornamental iron railings and gates. The acoustic qualities of the halls have been carefully studied, the roofs being kept low, and the arched openings formed in side walls on this account.