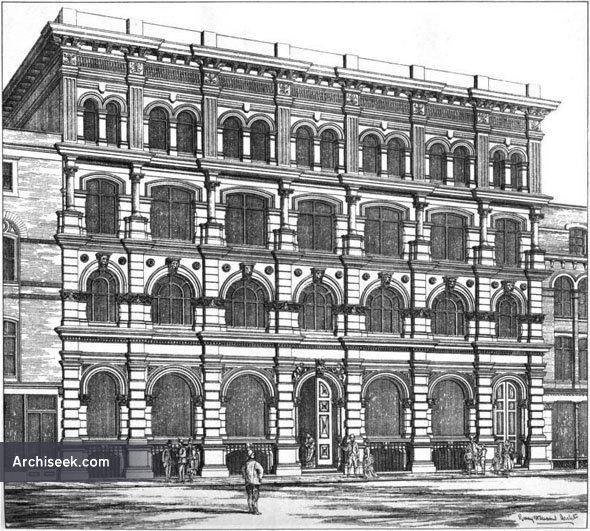 From The Architect, November 6, 1875: This new premises lately erected for Messrs. Wills & Williams in Victoria Street, Bristol, are built on the site of the old White Lion, and have the unusual advantage of being lighted on three sides. The building extends from Victoria Street into St. Thomas Street, with an average depth of 76 feet, and covers an area of 6,000 feet. The length of front (Victoria Street) is 80 feet, and height from pavement to top of cornice is 02 feet. The front is of Bath stone (Farley Down), 10,000 cubic feet of stone being used in the front alone. The piers are sunk and moulded, having carved caps with rams’ heads on the front and sides, representing the woollen trade, the upper part of the caps being filled in with laurel leaves entwined with a riband. The spandrels of the arches are moulded and sunk. The centre of the arcade forms the principal entrance doorway, which is raided by steps four feet above the level of the pavement. The arch over the doorway is supported on polished serpentine marble columns, with carved and moulded caps and bases. The spandrels are sculptured with figures representing “Justice ” and “Industry,” the other parts of the spandrels being filled in with a beehive, a loaded ship, bales of cotton, and oak leaves. The key-stone is a bold sculptured head supporting the globe, emblematic of commerce. The piers support a massive entablature, the cornice having a denticulated band. Above is an arcade of seven arches, resting on piers with elaborate carved caps, with swags of laurel leaves and Minerva head on the front and sides. The keystones of the arches represent a lion’s head. The spandrels of arches have carved flowers in bold relief on each side. In the second floor the monotony of the vertical piers or pilasters is broken up by introducing pedestals with circular columns, having capitals boldly carved with a dolphin’s head in the centre, filled up with water leaves, supporting a moulded entablature. The third floor, 01 top storey, is again divided by massive fluted pilasters, supporting the cornice, but the spaces between the pilasters are divided into two-light circular-headed windows, with moulded arches, piers, caps, and bases, the whole being crowned by a carved and boldly-moulded cornice, eight feet in height. The frieze is fluted, with square foliated panels at intervals. The carving has been designed to make the adornment of the building somewhat emblematic of the business carried on within it.

The. structure contains basement, ground floor, first floor, second floor, and third floor. The basement is 10 feet high, and well lighted. The walls are lined with brick and coloured a light French grey. A staircase, 0 feet wide, leads from the basement to the ground floor. The entrance from Victoria Street to the ground floor leads into a lobby made of pitch pine, and glazed with plate glass. In front is tho stock room and packing room. The height from floor to ceiling is 14 feet. The walls are lined with pitch pine (varnished) from floor to ceiling. The ceilings are also of pitch pine, the joists being moulded and the whole of the timber exposed to view. Massive iron columns with moulded bases and foliated capitals support the floor above. The columns are painted light grey, the capitals being slightly decorated. In the centre of the stock room is a circular staircase of pitch piue, leading to the first floor. The first floor is 12 feet high, and is used as a stock room, other portions being fitted up for counting-houses, offices, private rooms, &c. The walls on this floor are also boarded, the ceiling being supported by iron columns, similar in all respects to those on the ground floor. ‘Ihe second floor is 11 feet high, and is also used as a stock room ; spacious dining room, kitchens, and other offices being proTided on this floor. The third floor is used as a manufactory, a separate staircase, with an entrance in Thomas Street, being specially provided for the use of the workpeople. One of Messrs. Buhhett & Co.’s patent safety lifts passes from the basement to the top floor, with means of access for raising and lowering goods from each floor. Special care has been devoted to the sanitary arrangements throughout the building.

The Thomas Street front is built of Shortwood bricks, with Bath stone dressings ; the windows are deeply recessed, circular headed, and supported on brick pins with moulded caps, bases, cable moulds, and strings. Special entrances are provided for the packing and factory departments, and the speedy delivery and exit of goods. The premises are lighted with gas throughout, specially-made wroughtiron coronas being fixed to the iron columns on each floor, which afford first-class light, combined with great security from fire. The general contractors for the erection of the building were Messrs. Maltees & Crick, of St. James’s Square, Bristol. The sculpture Â»nd carving were executed by Mr. Collet, of Stake’s Croft; plumbers’ work, Mr. Symonds ; smiths’ work, Messrs. Baker ; glazing, Msssr, John Hall & Sons ; gas fittings, Mr. Pitt ; fixtures, Mr. Neal. The architect’ is Mr. Henry Williams, of the Royal Insurance Buildings, Corn Street, Bristol.