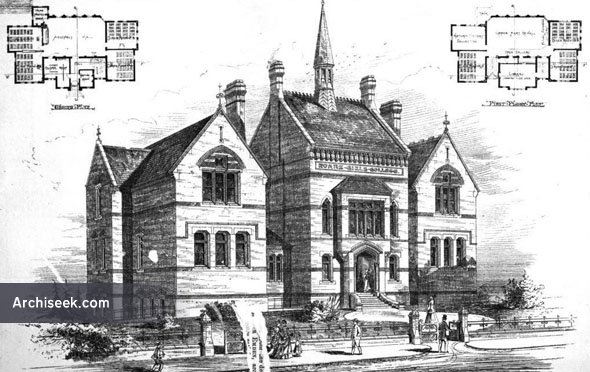 From The Architect, September 25, 1875: “In the autumn of last year it may be remembered designs were invited by the governors of Roan’s Charity Greenwich from six selected architects in limited competition, that by Mr THOMAS DINWIDDY which we now illustrate from the original competition drawings being the design finally chose. The competitors were required to plan the building upon the Prussian system excepting that a double class room was needed and as many class rooms as possible were to open direct from the hall and to provide accommodation for the secondary education of 300 girls at a cost not exceeding 4,500 exclusive of furniture and further the building was to be capable of extension. The selected design comprises seven class rooms planned for forty scholars each all with left lighting excepting necessarily a moiety of the double class room, a large hall from which all class rooms are approached, those on the first floor from an open gallery, a spacious library and governor’s board room combined with drawing class over having good north lighting a mistress’s room so placed as to command the playground and the entire traffic to and from all class rooms, a natural history class room, a waiting room, and cloakroom with lavatories conveniently placed at entrance, the latter with through route. The basement contains small dining hall, a cooking class kitchen, teachers room, caretakers rooms, latrines, cellars, and offices and finally a covered playground beneath the large hall.”

Built to the designs of Thomas Dinwiddy in 1877-8 in Gothic style with additions to the east of 1906-7 designed by Alfred Roberts and on the west of 1936-7 by Percy B. Darnatt. No longer a school. Grade II Listed.